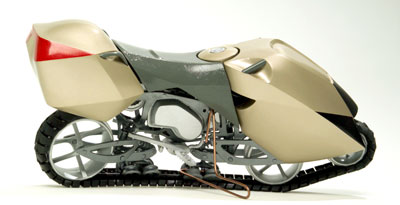 ­Although they're all personal methods of transportation, a motorcycle, an ATV and a snowmobile have very distinct functions. If you want to head out on the highway, you'll probably hop on your motorcycle. Motorcycles aren't meant to go off-road, however, so if you want to navigate dirt trails, an ATV or a dirt bike is a good choice. And as its name implies, a snowmobile is perfectly suited to snowy, icy roads and trails. Many people own at least one of these vehicle­s, but most don't have one of each. Wouldn't it be great if one vehicle could handle all of these separate road conditions without even having to change tires? Enter the Hyanide, a concept vehicle designed to do just that.

The Hyanide's designers see it as a vehicle that can tackle the duties of these other vehicles. It looks a lot like a motorcycle, until you notice that instead of sitting on two wheels, it has a long tank-like tread that runs the entire length of the vehicle. Some people call it a "tank motorcycle."

Because only a small part of the tread needs to be touching solid ground to keep the Hyanide moving, it would be almost impossible to get stuck while riding it. The Hyanide will also be fast and agile, in part because the treads are much lighter and more flexible than the treads on a tank or bulldozer.

While the Hyanide is perfect for recreational use, it could also fill a number of roles for people who need to get around large wilderness areas without cleared trails. It would be ideal for park rangers and researchers heading into ecologically-sensitive places, because the long tread distributes the Hyanide's weight across a large area. It would have less impact on the terrain than a snowmobile or an ATV.

A motorcycle, an ATV and a snowmobile each have very distinct functions. But what if you could combine them in one vehicle? Enter the Hyanide.
2008 HowStuffWorks

The Hyanide's design elements are unique. The tread comprises 77 plastic segments covered in the same kind of rubber used to make car tires. Kevlar, the same material used to make bulletproof vests, links the treads together. Unlike the heavy metal tread links on a bulldozer, the Hyanide's treads are relatively light and make it more maneuverable.

Steering the Hyanide is a bit unusual. A motorcycle rider steers by turning the front wheel, and a tank steers by moving just one of the two treads in relation to the other -- if the right tread moves while the left tread is still, the vehicle will turn left. But the Hyanide doesn't have a front wheel, and it only has one tread. When the driver turns the steering handle to the left, the front part of the tread angles to the left. Pushing back the left foot control will simultaneously turn the back segment of the tread as well, giving the Hyanide a very sharp turning radius. Meanwhile, the tread is constantly driving in the direction of the turn, so it always maintains maximum traction.

The driver implements the hand-and-foot steering system with two handles for his hands and two special footrests that accommodate custom-made shoes. A passenger can ride directly behind the driver, just like on a motorcycle.

The engine compartment of the Hyanide will accept engines currently on the market as well as future technologies such as engines powered by hydrogen fuel cells. The Hyanide's original design calls for a 60-hp 500cc liquid-cooled single-cylinder engine capable of pushing the approximately 600-pound machine an estimated top speed of 85 mph. This engine resembles existing ATV engines. 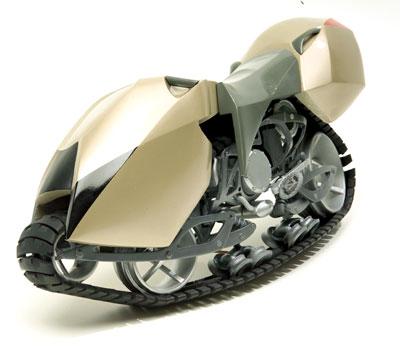 Tilmann Schlootz and Oliver Keller designed the Hyanide. Schlootz, 26, is a student of product design and machine engineering. He has won several other international design awards and is known for his innovative motorcycle designs. Keller is a 24-year-old product design specialist schooled at HFG Offenbach. They created the Hyanide for the Michelin Challenge Design, held in January 2006 at the North American International Auto Show in Detroit. Each year, Michelin encourages design students to explore a regional theme. This year's theme was California. Organizers also directed designers to incorporate an alternative powertrain and "consider the effect of that powertrain on tire size and appearance and the role electronic technologies could play in tire systems" [ref].

While the Hyanide is certainly innovative, it is not the first personal-treaded vehicle ever designed. In 1980, a Finnish company produced the Finncat, essentially a snowmobile without skis. Instead of skis, the Finncat featured a track made from two long plastic segments joined end-to-end. Steering bars controlled pivoting guide wheels, allowing the tread to flex with turns. This configuration probably would have allowed it to work on more than just snowy terrain, but moving on or through snow was its primary job.

The Mattracks Company sells conversion kits that allow you to configure virtually any vehicle with treads instead of tires. You attach four triangular tread devices in place of the tires, and a series of gears transforms the rotation of the wheels into tread movement, geared down for added torque. Their Litefoot kits for converting ATVs to treaded vehicles range from $5,000 to $7,000.

The Baal is a lighter version of the Hyanide meant for racing.
Image courtesy Tilmann Schlootz & Oliver Keller/Michelin Challenge Design

Schlootz and Keller also designed another single-tread all-terrain vehicle, the Baal. While the Hyanide is meant to be a daily workhorse, the Baal is race-ready, with a broad handlebar for precision steering and a lighter overall weight than the Hyanide. Drivers could race it in long-distance off-road races such as the Dakar or Baja.

Currently, the Hyanide only exists as a one-fifth scale model, and Schlootz and Keller don't have any plans to put it into production. However, several manufacturers have expressed interest in the concept, so we could see the Hyanide's "flexible tread" technology showing up in production models in the near future.

For lots more information about the Hyanide and related topics, check out the links on the next page.

Schlootz and Keller named their design "Hyanide" because they thought that its low-slung profile made it look like a crouching hyena.

What is the world's fastest motorcycle?
10 Vintage Motorcycle Brands
Can motorcycle jackets save your life?