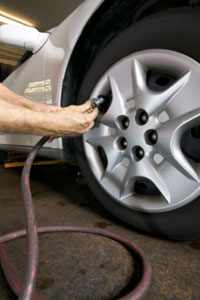 If you own a car built after 2007, you have a tire pressure monitor system at work. You know it best as the horseshoe-shaped light (it's actually a stylized, flattened tread and sidewall of a tire) with an exclamation point in the center. It's also the light that can plague you by coming on and going off at inexplicable times, and sometimes signaling an expensive trip to the dealership.

But this indicator light is the visible part of a larger pressure monitoring system, and it's there to help. When it's on, it's telling you that your tires need air.

The various tire pressure monitoring systems (or TPMS) used by auto makers are designed to monitor the air pressure in a car's tires. The idea behind a TPMS is primarily safety-related -- underinflated tires offer a less stable ride, and they're more prone to possible blowouts. By calling attention to an "underinflation event," the system can prompt the driver to inflate the tire (or tires) to the proper levels.

Sensors within the tire, or on the car, send information to one or several modules in the car. These modules are programmed with a range of acceptable circumstances. For direct tire pressure monitoring, this is often between 28 and 35 pounds per square inch (psi) of air in the tire.

This rather innocent light has a tragic origin. During the late 1990s, more than 100 automotive fatalities were attributed to Firestone tires that lost their tread when they were run underinflated, and friction heated them beyond their capability to handle. The tires blew out or delaminated, and this led to the rollover of the vehicles they were on. Most of those vehicles were Ford Explorers, and many times one or more of the occupants died.

The fatalities led to two major changes to the automotive industry. The first was the Transportation Recall Enhancement, Accountability and Documentation Act (The TREAD Act). The act, later signed into law, required tracking of, and response to, any possible danger signs from vehicles that would require a recall or posed a safety risk.

The second major addition was the requirement of a TPMS system on all cars built after 2007 in the United States. Like most quickly-introduced changes, there were problems with the systems. But as technology improves, and engineers refine how the systems function, they're becoming smoother and more reliable.

Read on and find out how the systems actually see inside your tire, what they see, and how your car reacts to the information. 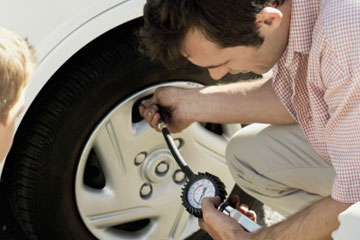 If your light goes off, it's a good idea to check your tire pressure as soon as possible.
Stockbyte/Getty Images

Direct tire pressure monitoring systems use individual sensors inside each tire, and sometimes a full-size spare, to transmit information to a central control module. The sensors read internal pressure, and sometimes temperature. The information received at the module is analyzed, and any issues with any of the tires are sent to the car's vehicle information system, or low-pressure light.

Information is most often sent wirelessly as a radio signal. While some aftermarket systems are mounted outside the tire, most manufacturers use a sensor mounted inside the tire. This is where the expense for the consumer comes in. Each sensor has a battery with a life of about a decade. On most, the battery is not serviceable, and the entire sensor must be changed. The sensor stem is also subject to damage, as is the sensor itself, when the tire hits a curb or the car gets into an accident. And each time a sensor is changed, it generally has to be reprogrammed into the control module so it can be recognized.

The wireless system is also prone to problems and challenges, as well as being integrated with other car systems that can fail or become corrupted over time. Added to this mix is the often-proprietary technology used by each manufacturer, making the range of sensors out there a confusing mix for shops and consumers.

Indirect tire pressure monitoring systems don't rely on sensors to do the work, or at least not pressure sensors. The systems rely on wheel speed sensor data to interpret the size of a tire based on how fast it rotates -- a small tire would rotate faster than a larger tire, and an underinflated tire is smaller than one with proper inflation. All of this data can be gleaned by electronic monitors within in the car, and then interpreted using advanced programming and processing.

This system is less prone to the vagaries of direct sensors, but more attention must be paid to it. For instance, imagine that a driver fills up his tires with air at a gas station and checks the pressure before heading out on a long trip. An indirect system needs to be reset every time the tires are inflated, or it will see the newly inflated tires as a possible hazard. In this case, if it isn't reset, the system will see bigger tires and may warn the driver of over inflation.

For lots more information on safety and regulatory systems, see the links on the next page.