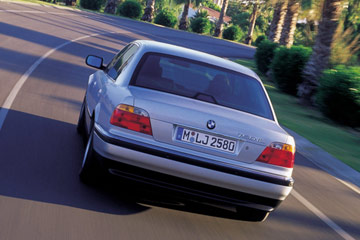 Brake systems used to be simple. When you pressed the pedal, a mechanical system physically used brake shoes to stop the car at the wheels. While the friction of brake pads is still at work when you stop your car, electronic advances like ABS, brake assist and now brake override systems have changed what happens between putting your foot down and stopping the car. There isn't necessarily a direct connection between your foot on the pedal and the brake pad on the wheel.

Brake override is also known as a smart pedal. In these brake systems, sensors recognize when the gas pedal and brake pedal are being pressed at the same time. They also recognize that this isn't how people normally drive, and that something is going wrong. The car's central computer then has a variety of ways it can slow the car down safely.

The technology was first used in the BMW 750 in the late 1980s as a performance enhancement for heel-and-toe race-style driving , in which a driver uses the heel and toe of one foot to control two pedals at the same time. Every BMW built since 2001 has had brake override. Chrysler was the next manufacturer to use brake override in its 2003 models. These days, several car manufacturers use the technology, with more soon to follow [source: Motavalli].

Speaking of technology, let's take a look at what's involved in a brake override system on the next page.

The technological breakthrough that made brake override systems possible is the same thing that made so many of our safety systems possible: a fully integrated electronic system. Once BMW built the system for its electronic throttle, or "drive-by-wire" system, which relied on electronics rather than mechanical or hydraulic controls, it was simple to add a brake override system, too. The wires were already there, and so was the computer.

As Nick Cappa, the engineering and technology spokesperson for Chrysler, said, "Electronic controls gave automakers the opportunity to operate multiple systems with one action." So if it wanted, an automaker could make the dome light come on when you turned on the radio, since it's all connected with sensors that relay information to the computer. Or, more practically, the system could sense a problem with the brake and gas pedals and safely slow the car down.

In the case of brake override systems, the system requires sensors at the brake and gas pedals, a computer to make decisions for what the car should do and wiring to connect it all. If it detects a problem, like the driver holding the brake while the car is speeding up, there are several ways for the computer to engage the brake override and "derate" the engine, as the auto guys call the reduction of power. It can:

Which course of action the car takes depends on what the manufacturer has programmed the computer to do when the gas and brake pedals are both pressed. No matter which method the car uses, the goal is the same -- the car will slow to a stop.

Toyota, for example, uses accelerator pedal sensors, brake light switch circuitry and vehicle speed sensors to detect when a vehicle may be going out of control. If the vehicle is traveling at 5 mph (8 kph) or more and the brake pedal is pressed for a half second or more, then the system puts the engine in idle to slow it down. The half-second allowance keeps the system from trying to stop the car during hill starts or when the driver is rocking the car to find traction in snow or mud.

This is all fancy stuff, but what are the benefits of a brake override system? Read on to find out.

If a car is accelerating for no good reason, most drivers have the same natural reaction -- step on the brake. It's not a bad instinct, and programmers have used it to create brake override systems. The most obvious benefit of brake override systems is increased safety. Whether the failure is human or electrical, the system can act as a failsafe and reduce the chance of a high-speed crash.

Nick Cappa at Chrysler says the computer is trying to figure out what the driver is trying to do, and whether that's different from what the driver is really doing. If the sensors detect a disconnect between intent and what's really going on, like the car accelerating while the driver is braking, the computer engages the brake override to decelerate the vehicle. More and more cars are relying on an electronic throttle to adjust the car's speed, so the addition of an electronic system that can correct any problems with the throttle is a plus.

You can also get a sense of the benefits of brake override systems by looking at cars that don't have them. Take the case of Toyota's October 2009 recall involving uncontrolled acceleration of its vehicles. By early 2010, the National Highway Traffic Safety Administration had received 43 complaints of fatal accidents involving Toyotas since 2000. These accidents resulted in 52 deaths and 38 injuries, which lawmakers believed could have been avoided if the cars had a brake override system, according to a New York Times story.

Since brake override systems are a potential lifesaver, lawmakers are looking at how best to regulate them. Read on to find out which vehicles are using brake override technology.

Do All New Cars Have Brake Override Systems?

As of early 2010, quite a few new cars come equipped with brake override systems, but the systems aren't universal. President Barack Obama's administration recommended, but did not require, that manufacturers include the system in new cars as a response to a massive recall of Toyota models with acceleration issues.

Manufacturers with brake override in at include pioneer BMW as well as Chrysler, which has the systems in 97 percent of its vehicles (only the PT Cruiser doesn't have it). Audi, Mercedes-Benz and Volkswagen also have at least some models that use the technology. By the end of March 2010, all new Hyundais will have brake override, and by the end of 2010, all vehicles from Toyota, Lexus and Scion will use it, too [source: Motavalli, U.S. News].

As more and more models use integrated electronic systems including drive-by-wire rather than mechanical accelerators, it's likely that more models will come with advanced safety systems like brake override. Of course, this system doesn't work if the driver just plain old mixes up the gas and brake pedals, pressing them one at a time. There are some problems technology can't solve.

Is driving drunk worse than driving sleep-deprived?
Are teens more likely to die in a car accident than adults?
HowStuffWorks Illustrated: Zipper Merge