How the Hüttlin Spherical Engine Works 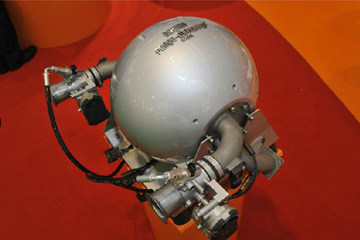 The Hüttlin Spherical Engine on display at the Geneva Motor Show in 2011. See more pictures of car engines.
Courtesy of Innomot AG

It seems like every time a new hybrid model is launched, or a current model is updated, there's some little tweak or update that provides just the slightest boost over the competition...just enough for marketing purposes, really, and such improvements are celebrated to no end. But there's no reason for scorn -- when it comes to environmental impact and energy conservation, every little bit really does help.

But as these minor milestones have been praised over the years, a German engineer and his team of Swiss developers have been toiling away...since before the hybrid began its evolution from the feared to the trendy to the mainstream. And the result is unlike anything anyone could have predicted would be possible at all. So it's nothing short of fabulous that the best innovation in hybrid technology in years, with a genesis that dates back long before the widespread use of the current hybrid drivetrain, was revealed just in time, when hybrids and electric vehicles (though selling as well as ever) were due for a fresh charge.

The Hüttlin engine made its public debut at the Geneva Motor Show in March 2011, mounted on a display stand amongst the other environmentally-friendly tech exhibitions, and reportedly attracted a steady flow of attention in a way that only a spherical aluminum engine could. So, we'll start by indulging Dr. Hüttlin and Innomot AG, the team behind the Hüttlin motor, suspending disbelief, and assuming that the shape is indeed the most practical possibility for its purpose. Even if the shiny globular design is a bit of folly, the science seems solid and the statistics are impressive.

The Hüttlin Spherical Engine (or "kugelmotor") has many of the benefits of an electric vehicle without the common drawbacks, such as the limitations of the charging infrastructure and what electric vehicle critics refer to as "range anxiety," the pervasive fear that the battery will run out of juice before a charge becomes available and, without a gasoline backup, will leave the driver stranded. Furthermore, typical hybrid efficiency characteristics -- such as lower weight, fuel savings and reduced environmental impact -- have been improved. The Hüttlin Spherical Engine shows promise that it can provide the necessary boost to take hybrid engineering to the next level, and, by overcoming range limitations, could help electric vehicles gain widespread acceptance.

What is a range extender (in an automotive context)? 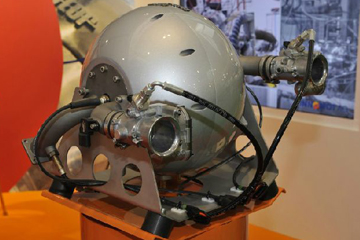 The Hüttlin Spherical Engine on display at the Geneva Motor Show in 2011.
Courtesy of Innomot AG

The Hüttlin Spherical Engine would look kind of goofy rollin' around under the hood on its own, but no worries: it was designed to be part of a system, not a stand-alone power source.

A "range extender" is basically what distinguishes a hybrid vehicle from a pure electric vehicle. It's the additional power source that allows a hybrid to surpass an electric's limits of usability. Since range is often cited as one of the main concerns that prevent electric cars from earning widespread acceptance, this distinction plays a significant role in how the two types of vehicles are perceived.

Finding a reliable range extender, though, isn't quite as simple as perusing the ads at the back of men's magazines. In early hybrids, the range extender was simply an efficient gasoline engine that helped the electric motor bear the load, and the design looked much like an ordinary engine: an electricity generator provided the juice to pump a shaft that, in turn, moved the rest of the engine's parts, which got the fuel-burning cycle underway. Many hybrids on the road still operate like this, more or less, though different manufacturers may emphasize, say, "normality" over efficiency, with the car's drivetrain engineered to favor one power source as opposed to the other. (Though hybrid technology's come a long way in just a few years, the basic layout options haven't changed much.)

Now, though, different types of motors are being developed to help push the game along, and are testing the limits of hybrids' capabilities. Some range extenders run at a constant clip; others kick in only when the electric engine needs a bit of stimulation. Some of the designs are still pretty straightforward, inspired by and drawing from traditional automotive technology. And others, as we've seen...well, they're out there.

Dr. Hüttlin and his team came up with a new design that rolls in the face of established and accepted engine design principles. Instead of wrapping his design around typical mechanics (the common shaft and generator setup), he wanted a more sleek and functional design, a largely self-contained engine that created its own power to get rolling. His design reflects the thinking that a range extender shouldn't squander the hybrid's resources; it should be light, compact, economical, and as inexpensive as possible. This isn't a new idea, but it made him realize it might be worth the effort to go back to the drawing board.

Reconsider that approach after reading the next page...and the Hüttlin Spherical Engine might seem a lot less whimsical and quite a bit more graceful.

Get This Ball Rolling 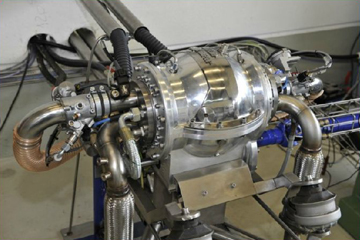 The Hüttlin is designed to supplement the electrical power of a hybrid car, but for the sake of simplicity, pretend for a moment that it's a stand-alone engine. In practice, the power it produces will be routed according to that particular hybrid's power-sharing design, but for the purposes of understanding how the motor itself makes power, where the power goes afterward is basically irrelevant. It's hard enough to describe as it is.

Here's the simple stuff: The prototype Hüttlin that's been making the rounds produces about 104 horsepower, but unlike a traditional gasoline engine, Dr. Hüttlin claims the design is easy to scale to suit almost any power need. Modern automotives are liquid-cooled, but the kugelmotor can also be adapted for air-cooled setups. It's built from just a fraction of the parts of a traditional engine (about 60 components in the Hüttlin, as compared to about 250 in an average four-piston), which helps achieve the goals of efficiency and economy, since there are fewer parts to produce and assemble. That means, in part, that the Hüttlin achieves more than 30 percent efficiency (in other words, less than 70 percent of the power it produces is squandered to heat, noise and wasted friction), which, of course, means the engine will use less fuel, and will also give off fewer environment-harming emissions. Traditional engines, by comparison, achieve only about 20 percent efficiency. Think about that next time you fuel up.

Here's where it gets more complicated: The engine's movement, referred to as "three-dimensional kinematics," features gasoline combustion and a four-piston design, but after that, it's like being on another planet. The sight of the engine is a head-scratcher -- a silver ball with pipes coming out. Like Spaceship Earth at Epcot... how does that sphere encase what everyone claims is inside? Housed within the lightweight aluminum globe are more kugels that run in tracks inside the two pistons on the same bearing, which are inside the rotor, which rotates within the outer aluminum shell. As the rotor rotates, the pistons pump in opposition, and the kugels glide along their tracks...the movement of which makes the rotor spin. Got that? (The fact that the basic parts share names and roles with everyday engine parts really doesn't help at all.)

And along the way, some coils and magnets help generate power, and transfer the power outside the sphere to a set of batteries that act as temporary holding packs to move the power along the drivetrain as needed. The power is sent to another motor that directly drives the wheels (instead of sending the power directly down a traditional drivetrain), which Innomot AG says is more efficient.

Dr. Hüttlin has said that the kugelmotor took a couple of decades to figure out and develop, but expects to see it in production vehicles in about 2 to 5 years. The patents were filed in December 2010 (rounding out Dr. Hüttlin's portfolio of more than 150), and Innomot AG plans to license the technology, so the Hüttlin could soon be nestled in the engine bay of a range of hybrids.

This assignment initially struck me with fear: the fear of typing "range extender," combined with any word containing an umlaut, into Google. Upon further research, I discovered the inventor of the Hüttlin reportedly refers to his creation as a "kugelmotor." "Kugel," which may sound familiar to aficionados of Jewish cuisine, is actually German for "ball." Not at all reassuring. But I still had a glimmer of hope for the spherical motor. I tend to be fond of German engineering beyond all reason (such as my bizarre affection for a particular type of compressor-style supercharger, best known for its presence in late '80s and mid '90s VWs that was practically guaranteed to fail spectacularly at precisely 60,000 miles).

That said, it still took a bit of time to understand how this ball gets rolling. Every description I read seemed drastically different, borderline contradictory. And there was no shop manual handy to coax me through. So, considering my experience with German motor development, it seems a few decades have made a world of difference. (And on that note, my pulse quickened when I discovered that the Hüttlin has air-cooled potential. My fantasy future Karmann Ghia project just took on a whole new dimension.)