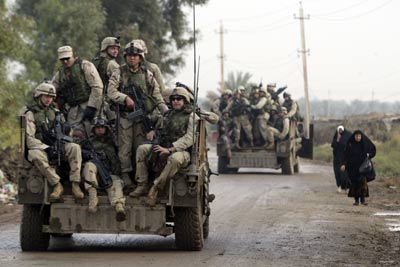 By the 1970s, Army officials were convinced that they needed to upgrade their fleet of ground vehicles. The Jeep, which was the Army's previous general-purpose vehicle, had outlived its versatility and usefulness in the field. They needed a new, adaptable vehicle that could handle the demands of the evolving nature of combat environments.

The basic Hummer vehicle is 6 feet tall, 7 feet wide, 15 feet long and weighs 5,200 pounds (2,340 kilograms). AM General used a steel frame with five cross members to support the weight of a vehicle with a payload of up to 2,500 pounds (1,125 kilograms), allowing a gross vehicle weight (GVW) -- the weight of the vehicle, passengers and maximum payload -- of 7,700 pounds (3,465 kilograms). In order to keep the vehicle's total weight at a manageable level, AM General used aluminum to construct the body of the car. The aluminum is strong enough to support heavy armaments or carry troops, yet is able to flex when the Hummer travels over rough ground.

A double A-arm independent suspension in the front and rear with hydraulic shock absorbers allow the Hummer to tackle unforgiving terrain. It also has torque-biasing differentials and four-wheel disc brakes, which give the Hummer the ability to continue moving even when some of the wheels lose contact with the ground.

AM General outfitted the Hummer with military tires, and some Hummers included a central tire inflation system (CTIS). With this system, a driver can adjust tire pressure without leaving his seat. By lowering the pressure in the tires, the driver could increase the Hummer's grip on rough surfaces, which can be handy if you're trying to drive up a steep hill covered in rocks. Higher pressure is better when driving on even surfaces -- it helps maintain a smooth ride.

Hummers have a 25-gallon (95-liter) fuel tank and can go about 300 miles (480 kilometers) before needing to refuel -- meaning a basic Hummer gets about 12 miles to the gallon, though heavier Hummer variations are somewhat less efficient. As per the Army's request, all military Hummers run on diesel fuel and have an automatic transmission -- the Army wanted all its vehicles to run on the same fuel system and felt that automatic transmissions would be easier for new trainees to learn quickly.

The Hummer has power steering and includes a 12/24-volt electrical system. Either two or four soldiers can sit inside the cab of the vehicle, depending on the variant. According to AM General, the location of the seats on either side of the drive train helps give the Hummer a low center of gravity.

The vehicles have powerful combat locks on each of the doors to help keep soldiers safe. Unfortunately, some soldiers have found it impossible to open the doors if the locks are damaged out in the field. To fix this problem, AM General now includes a D-ring on all Hummer doors. The D-ring is a loop of metal attached to the outside of the Hummer's doors and functions as a place to attach a cable or chain. A winch or similar device can pull the cable, forcing the door open and letting soldiers out of the vehicle.

That's the lowdown on the basic Hummer. Using this as a starting platform, AM General produced 15 different HMMWV variants. They designed 44 interchangeable Hummer parts, allowing the Army to modify, maintain and repair vehicles with incredible efficiency, economy and flexibility.

In the next section, we'll look at some of the variants of the military Hummer.

When It Has To Be There Overnight

AM General designed Hummers for rapid deployment, including dropping them from low-flying aircraft. A C-130 Hercules transport aircraft can carry three Hummers. The C-5A Galaxy aircraft can carry up to 15. Helicopters can even carry them and deliver the vehicle using a Low Altitude Parachute Extraction System. In theory, the Army can rapidly deploy a fully equipped Hummer to men in the field in a matter of hours.