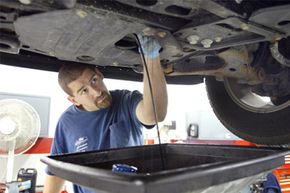 Finding the correct oil for your car or truck seems like a simple job -- it all lubricates and it's all basically the same color; just pour some in your [url='296']engine[/url] and go, right? Wrong.

Car and truck engines are usually designed with a specific type, viscosity, and amount of oil in mind. The oil will match the engine's close tolerances, move through the galleries in the correct way and take away heat at a measured pace. It'll also match the type of driving the car or truck is primarily used for; for instance, a daily driver will take different oil than a work truck. If you change the oil from the manufacturer standards you're changing how the oil moves and works, and those changes could lead to poor performance, engine damage or even a seized engine.

As engines become more sophisticated so has the oil that goes in them. Some engines call for [url='553027']synthetic[/url] only, some for odd [url='683']weights[/url] and viscosities. Other engine systems can monitor what type of oil is in the car and set a [url='533738']check engine light[/url] if the type is wrong.

Despite a bewildering array of oils on the market, with various [url='575239']additive[/url] packages and performance standards, finding the right oil for your car is relatively easy. But finding the best oil out of the array is a little more difficult. However, puzzling out the best oil can be a benefit. Oil is what keeps the engine from premature wear, overheating and a host of other life-shortening problems. Finding good oil, not just expensive oil, is an effective tool in helping keep a car on the road longer. 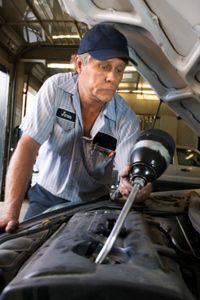 Your owner's manual will let you know what types of oil are best for your vehicle given its mileage, the type of driving you do and even ambient temperatures.
Thinkstock/Getty Images

The challenge in finding the right oil comes when a driver begins to examine the bewildering assortment of oils available on the market. There are different [url='575239']additive[/url] packages, viscosities, oils for high- and low-mileage vehicles, extended life and the list goes on and on. Added to the types are ratings from the American Petroleum Institute (API) and Society of Automotive Engineers (SAE) to consider.

The best place to start the selection process is in the owner's manual. The manual will lay out what types of oil are best for your vehicle given its mileage, the type of driving you do and even ambient temperatures.

Before shopping around, however, it's best to understand some basics.

[b]API symbols: [/b]The API uses two symbols: The API "donut" and the API Certification "starburst." The "donut" is divided into three parts with the top half describing the oil's performance level, the center identifying the oil's viscosity and the bottom half informing whether the oil has energy conserving potential. Performance levels are illustrated with an "S" for gas engines, and a "C" for [url='251']diesel[/url]. The "S" stands for "service," and the "C" for "commercial." The starburst symbol indicates the oil was tested and met the standards set down by the institute and will function as it claims.

[b]Viscosity: [/b]This test, developed by the Society of Automotive Engineers, determines how well the oil flows at 0 degrees Fahrenheit (-17.8 degrees Celsius), and at 212 degrees Fahrenheit (100 degrees Celsius). These tests arrive at the oil's designation, the familiar 5W-20, 5W-30, 10W-30 or 0W-30. Two numbers mean the oil is a multi-grade, tested at two temperatures. There are single-grade oils, but these are generally used for less critical applications, like in [url='538426']lawn mowers[/url].[b][/b]

[b]Type of oil: [/b]API approval and viscosity rating are really just the beginning. While oil may be API approved, and the required viscosity, it could be conventional motor oil, semi-synthetic, full [url='553027']synthetic[/url] or high-mileage. The owner needs to determine what type they should use. For example, most cars with more than 75,000 miles (120,701 kilometers) could benefit from high-mileage oil, but not always. An owner needs to know other factors, such as how often they changed their oil in the past, whether the engine seems worn and other car peculiarities before they arrive at a final decision.[b][/b]

Additive packages: Oil isn't just oil. Manufacturers add in various chemicals and minerals to change how the oil works within an engine. In high-mileage oil they may add a higher level of anti-wear agents, corrosion inhibitors and seal conditioners to get the most out of an aging engine and keep it running longer.

The next section will deal with each of the variables in depth to allow an owner to puzzle through the (sometimes confusing) world of engine oil. 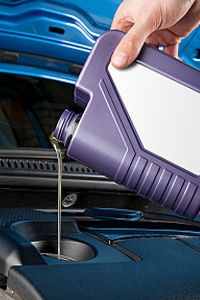 The owner's manual will advise the best viscosity range and the owner can then work within those parameters.
Nicolas Loran/Getty Images

Often times a manufacturer will suggest two or more motor oil viscosities for an [url='296']engine[/url], such as a 5W-20 or 5W-30, based on several different factors -- including temperature. The reason for this is that engines often need a different viscosity based on operating conditions. Knowing how scientists see viscosity will help an owner determine the best oil for the engine.

[b]Viscosity[/b], at its most basic, is a fluid's resistance to flow. Within the [url='575251']engine oil[/url] world, viscosity is notated with the common "XW-XX." The number preceding the "W" rates the oil's flow at 0 degrees Fahrenheit (-17.8 degrees Celsius). The "W" stands for winter, not weight as many people think. The lower the number here, the less it thickens in the cold. So 5W-30 viscosity engine oil thickens less in the cold than a 10W-30, but more than a 0W-30. An engine in a colder climate, where motor oil tends to thicken because of lower temperatures, would benefit from 0W or 5W viscosity. A car in Death Valley would need a higher number to keep the oil from thinning out too much.

The second number after the "W" indicates the oil's viscosity measured at 212 degrees Fahrenheit (100 degrees Celsius). This number represents the oil's resistance to thinning at high temperatures. For example, 10W-30 oil will thin out at higher temperatures faster than 10W-40 will.

The owner's manual will advise the best viscosity range and the owner can then work within those parameters.

With the right viscosity in mind, it's time to start shopping for a type of oil. Most commuters follow the 3-month and 3,000-mile (4,828-kilometer) rule. Frequent oil changes means there's less tendency to need other types of oil than conventional. However some car companies, like Mercedes-Benz and BMW, recommend only [url='553027']synthetic oil[/url] in their cars. The following list, as well as the car's owner's manual, will provide a good idea of what type of oil to use. It's also a good rule of thumb not to switch between types. If your car started with conventional, stick with that. If it first used synthetic, be wary about switching to conventional.

Some companies also add viscosity modifiers to thicken the oil, as well as anti-wear additives. We'll discuss those on the next page. 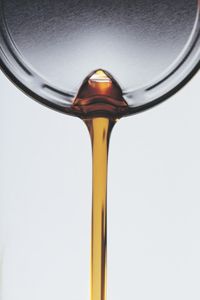 Additives, not always listed as part of the oil recipe, are also a factor to take into account. Listed below are some of the more common [url='575239']additives found in motor oil[/url]:

While additives are an excellent addition to car and truck oil, they have to be balanced against many factors and sometimes too much can be a detriment rather than an advantage.

Additives represent anywhere from 5 to 30 percent of a given quantity of oil. How they function within the oil is dependent on the base oil, the type of oil, viscosity, and a host of other factors. Every oil has a recipe, some will work well in an engine, some will not.

Among the best ways to find the right motor oil for your car or truck is to use the manufacturer's base recommendations, do a little research on the subject and then make the call. Also keep in mind that frequent [url='533714']oil changes[/url], as well as frequent filter changes, play a key role in keeping an engine running for the long haul.

For more information about choosing the right oil for your car or truck and other related topics, follow the links on the next page.

Eric Baxter "How to Choose the Right Oil for Your Car or Truck" 16 May 2011.
HowStuffWorks.com. <https://auto.howstuffworks.com/how-to-choose-the-right-oil-for-your-car-or-truck.htm> 22 May 2022
Print | Citation