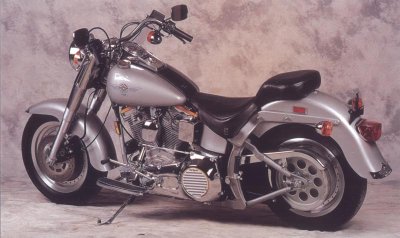 The 1990 Harley-Davidson Fat Boy helped ensure Harley's place atop the motorcycle world throughout the 1990s.

The years immediately after Harley management regained control of the company saw more engineering advancements than any other time since the early teens. Shortly after the buyback, belt drive -- both primary (engine to transmission) and secondary (transmission to rear wheel) -- was introduced, as were isolated engine mounts and five-speed transmissions.

Not all models had these features at first, but they were there for the asking. The FXRS of 1983 boasted anti-dive forks, and a new XR-1000 Sportster model featured an exotic dual-carb, aluminum-head motor based on the one used for the XR-750 racer.

But it was 1984 that really brought out the goodies. A new Big Twin that Harley called the Evolution V2 arrived featuring aluminum cylinders and revised heads. Still displacing 80 cubic inches, it boasted a higher compression ratio yet was perfectly happy running on regular unleaded gas. Computers were used in the design process, and the end result was a motor that was smoother, quieter, more powerful, and-as time would tell-far more reliable.

Per Harley practice, the valve covers were altered in design, this time displaying smooth, billet-like contours that soon had enthusiasts calling it the "Blockhead." Thankfully that name didn't stick, and most now refer to it as the "Evo." Oddly, not all models got the Evo that first year. Shovelheads were built through June of 1984, finding a home in-among others-the base Electra-Glide.

The 1998 Harley-Davidson FLHTCUI and its Evolution engine raised the bar for American touring bikes.

At midyear came a new wet clutch resulting in lighter lever action and easier shifting. Furthermore, models with primary chains (instead of belts) benefitted from the wet clutch because the chain could now be well lubricated without fear of splashing oil on dry clutch plates.

A new innovation took the form of a new rear suspension system that looked like the hardtail frames of old, but actually pivoted, extending springs mounted underneath the bike. Harley termed it the Softail frame, and it would soon be fitted to a wide variety of custom machines-and still is.

The Sportster's V-twin was updated with many of the Evolution's features in 1986, the first time this motor had seen any large-scale revisions since its introduction in 1957. It now came in two sizes measuring 883- and 1,100-ccs, the latter growing to 1,200-ccs for 1988.

Since the advent of the Evo, Harley-Davidson has produced a host of special models, many of which sold out before hitting the showroom floor. The FLSTF Fat Boy of 1990 is a good example, as are the anniversary editions commemorating the Motor Company's 85th, 90th, and now 95th birthdays.

Today, Harley-Davidson occupies an enviable position in the business world: Demand for its products far exceeds the available supply, and profits (along with stock prices) have been soaring. Because dealers and buyers have both been left wanting, the company is striving to expand production in the coming years to satisfy the appetite of enthusiasts.