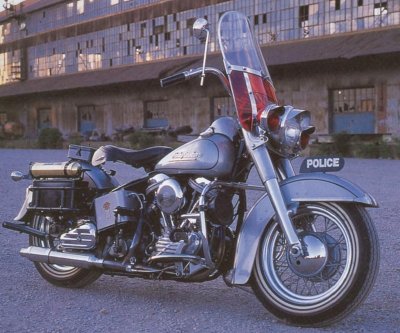 During the 1950s many law enforcement agencies contracted with Harley-Davidson for police motorcycles such as this 1951 Police Special.

Harley-Davidson was hard at work on an update of the Knucklehead even during the solemn years of World War II. Engineers revised the valvetrain to incorporate hydraulic lifters that alleviated the need for constant valve adjustment, and the motor ran cooler thanks to revised heads that were now cast out of aluminum. The new heads were capped by redesigned rocker covers that came out looking like upside-down roasting pans, prompting riders to nickname the new motor the "Panhead." It arrived for 1948, and with that, a new era at Harley-Davidson was begun.

Introduced the following year were Hydra-Glide front forks, modern telescopic units that replaced the old leading-link design. Besides doubling the amount of available wheel travel, they also lent a cleaner look to the Big Twins. So monumental was this innovation that the company referred to the bikes themselves as Hydra-Glides-the first time Big Twins were christened with a name rather than just a series designation.

The next few years brought only minor revisions, but 1952 saw the introduction of a hand-clutch/foot-shift option for the Big Twins. Like any change from tradition, this modern arrangement took a while to catch on, but by mid-decade, most riders had made the switch. Though hand-shift models were offered by Harley all the way through 1978, annual demand rarely topped 200 units.

Perhaps the biggest news of 1953 didn't have anything to do with styling or mechanical changes, but rather to the motorcycle market itself. After nearly 50 years as Harley's arch-rival, the Indian Motorcycle Company finally closed its doors. Indian hadn't been on firm financial footing since before the war, and the new tide of foreign imports that hit U.S. shores afterward pushed the company over the edge. Yet despite Indian's demise, Harley soon found itself struggling to survive-and for the same reason.

To combat the import onslaught, Harley-Davidson brought out a string of smaller offerings beginning right after the war and continuing on into the mid-1970s. First came the S-125 two-stroke single, which remained in the line until the late-1950s with only minor changes. Meanwhile, the W-Series 45 was replaced by the K-Series for 1952, the transformation bringing a redesigned flathead V-twin built in unit with the transmission, telescopic forks, and Harley's first rear suspension system. The K's 45-cubic-inch flat-head was enlarged to 55 cubic inches for 1954, and three years later the mid-size machine evolved into the famed overhead-valve Sportster.

By 1952, Harley models such as the FL Hydra-Glide were equipped with the new Panhead engines.

After celebrating its 50th anniversary with some specially trimmed 1954 models (why 1954 and not 1953 is a mystery, especially since subsequent anniversary models would use 1903 as year one), the next big change to the Big Twin line came with the adoption of rear suspension for 1958. With that, the Hydra-Glide became the Duo-Glide, putting Harley's big tourers on the cutting edge of technology -- well, late 1930s technology, anyway.

Minor alterations were made over the next several years, but it wasn't until 1965 that a major step was taken. In what would turn out to be the venerable Panhead's final season, riders were finally treated to the luxury of electric starting with the introduction of the Electra-Glide. To many, Harley's big touring bike was now "complete," and the Electra-Glide name endures to this day.

The next page talks about the Shovelhead era at Harley-Davidson. Keep reading.