Are solar-powered vehicles still a possibility?

Here we are, deep into a new millennium, and ca­rs are still pretty much the same as they were more than a hundred years ago. Sure, we turn a key instead of a crank to start them, and there have been incredible gains in performance

and safety, but every once in a while, you have to ask yourself, where's my flying car?

Okay, so may be a flying car is

too much to ask. But why is it

that the gasoline-powered internal combustion engine, the same device that powered early cars,

is still powering cars today? There's a lot of promise in alternative fuels like ethanol and hydrogen, but there's one power source that would seem to be a no-brainer when it comes to powering cars: The sun.

Taking energy from the sun is a natural process. Plants absorb the sun's rays and store the energy; animals and people eat the plants, taking the energy.

Solar power is the term for using the sun's energy to power a device or an electrical system. Solar panels are made up of a grid of solar cells. These cells collect the sun's energy and convert it into electrical energy (for more information about how solar cells do that, check out How Solar Cells Work). You may have seen solar panels providing electricity for houses, but did you know that solar panels are used to power the International Space Station and some satellites? When solar panels are properly positioned -- on Earth or in space -- they can be very effective.

If energy from the sun is clean and free, why aren't we using it to power cars? Is a solar-powered car a good solution? Keep reading to find out.

Solar power is currently being used to power some cars. Each year, various organizations hold solar challenges, like the North American Solar Challenge (NASC) and the World Solar Challenge. These challenges host teams of future engineers that build and race solar-powered cars. The teams come from various colleges and universities around the world.

The cars, however, don't look like anything on the road today. For one, they are long, wide and very flat. This allows them to run with minimal wind resistance while also having plenty of space for their solar cells. Even though the vehicle dimensions are large, there's typically only enough space for one person. This is to reduce the overall weight of the vehicle. They may be unconventional, but these solar-powered projects really do work.

In the American Solar Challenge events, the cars race across the United States and Canada; in the World Solar Challenge events, they race across the Australian outback. The cars can reach speeds up to 50 mph (80 km/h) as they cross the entire continent without using a drop of fuel. But, for the most part, these challenges are only engineering exercises. That is, they're held simply to learn about various aspects of solar power and car design, not to ready the technology for production.

On the next page, we'll see what automakers have learned from these solar races, and find out why there isn't a solar-powered car parked in your driveway right now.

Pros and Cons of Solar-powered Cars

While they are still a possibility, solar-powered cars are a long way off. There are a number of practical problems with solar-powered cars. Most importantly, it's difficult for the car's solar array to gather enough power to move the car. That's why most solar race cars only carry one person -- the extra weight of a passenger would tax the car's power.

The way solar cars gather and store power is also a big issue. Solar power makes sense for buildings, the space station and even satellites because those structures are regularly exposed to the sun. These applications also have the ability to use batteries to store the energy the sun generates. A large battery pack -- with enough storage to power the car from sunset to sunrise -- would make an electric car far too heavy, so a solar-powered car must be in the sun at nearly all times to be effective. That means solar-powered cars aren't very practical if you're in a tunnel, a covered parking garage or even if it's cloudy. Building rooftops, the space station and satellites also have the space for much bigger, more powerful solar arrays that allow them to gather more energy. For a car to harness the equivalent amount of energy, the vehicle proportions would have to be huge.

Beyond that, there's the high cost of the solar panels. The type of solar panels used on solar-powered cars is very expensive. In fact, a competitive solar-powered race car can cost hundreds of thousands of dollars -- and as we've already mentioned, currently, there's not a very good way to make the car useable when the sun isn't out.

For more information about solar power, solar-powered vehicles and other related topics, follow the links on the next page.

You may not have to wait too long to get your hands on a car that's at least partially solar-powered. There's speculation that the 2009 Toyota Prius will have a solar panel on the rooftop that could help power the vehicle's air conditioner and other electrical accessories. General Motor's Cadillac Provoq concept, which debuted at the Consumer Electronics Show in Las Vegas, Nev., also has a rooftop solar panel. This type of sparingly applied solar technology may not be too far from the showroom floor. 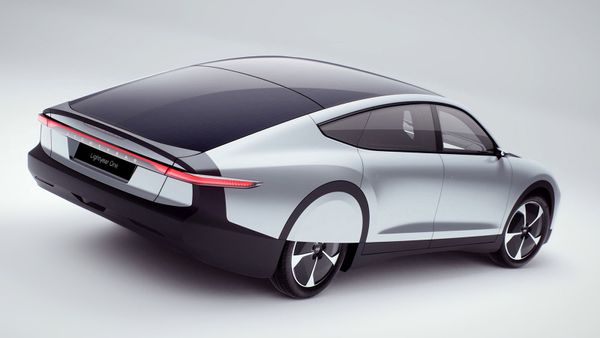