Browse the article Will solar powered cars ever take over the streets? 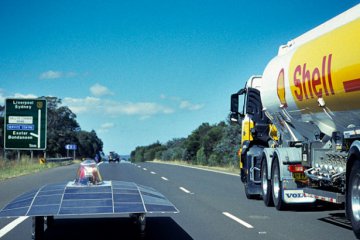 Have youe ever seen a solar powered car? Check out these alternative fuel vehicle pictures to learn more!
lytfyre / CC

A lot of solar cars have been built and driven, some of them amazing designs. They’re not actually all that complicated; you could even build your own if you put your mind to it. But the vehicles are very rarely seen on the streets. Those that exist have almost all been built for races, like Australia’s World Solar Challenge or the North American Solar Challenge. These competitions demand long distances, and seeing only half the competitors actually finish the race is typical.

There’s a long way to go from this state of affairs to a world where fossil fuels are a thing of the past and the Sun gets us from Point A to B. But will it ever happen? We break it down. 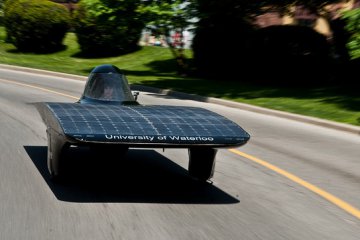 Would you drive a solar powered car?
lytfyre / CC

This part is easy. Solar power means no drilling for oil in the Arctic. It means no Gulf Oil Spill, it means no more gasoline fumes. And unlike fossil fuels, the Sun isn’t going anywhere (we’re pretty sure).

Conventional cars use only 15% of the gasoline they burn for moving; solar cars blow that away with 90% efficiency. In theory, you could park your solar-paneled car in your driveway and use the energy it collects not just to charge its own battery, but to power your house. 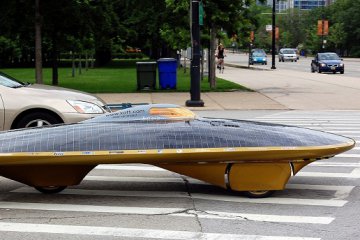 Can you imagine?
Mark Ludwig / CC

As great as all that sounds, reality gets in the way. One statistic stands out in my mind as to the limitations of solar powered vehicles: the Guinness World Record for fastest solar car is a mere 55 mph. Compare that to 137 mph for electric vehicles. Gasoline powered cars have outraced the speed of sound.

There’s also a large gap between solar vehicles being built for races and those people would want to drive every day, if at all. Most solar cars look rather uncomfortable, and don’t have room for a cup holder, let alone a passenger, backseat or trunk.

Finally, there’s the question of how far a car can go on a charged battery. What if it’s cloudy, or winter, when the days are short? These are make-or-break questions, since no one’s going to buy a car that can’t promise reliability and a respectable range.

What’s On the Horizon 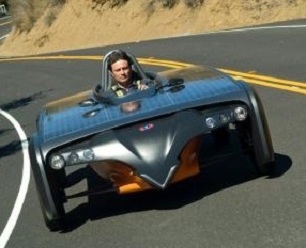 Check it out!
Venturi

To date, no automakers of note have public plans to develop a solar car for market. In January 2009, a rumor spread that Toyota was building one caused a lot of excitement, but there was no truth to it.

Going back to 2007, there was talk that a Taiwanese team that had competed successfully in the Australian World Solar Challenge was getting ready to bring a solar car to the streets. Since then, there have been no reports of this actually happening; the team’s blog seems silent on the subject.

French automaker Venturi’s Eclectic Concept, which ran on solar and wind power, was lauded upon its debut at the 2006 Paris Motor Show. But with the Eclectic 2.0, Venturi dropped the solar panels. With the Astrolab, the company has a solar-powered commuter car, but it looks so unlike any other car on the road today, it’s hard to imagine it really catching on.

So where does all this leave us? The downsides of the vehicles and the lack of dedication from the auto industry mean that solar cars aren’t going to be dominating the market in the near future. But don’t mistake that for a death sentence. Solar technology has made remarkable progress in the last few years, and the potential upside of these advances will translate into more research and more advances.

The Guinness World Record for the fastest solar-powered car was broken this year, and as the electric vehicle market expands, it’s easy to believe there’s room for solar power to join the pack. Eventually, we will hit a tipping point when the cars become affordable and practical, and their costs are outweighed by their savings in gasoline. When that will happen is impossible to know.

There is an intermediate step, however, one that Toyota has made available for the Prius: Use solar panels as one of multiple power sources. After all, the hybrid Prius helped bridge the gap between purely gasoline cars and the EVs that are now taking more and more of the market.