Do solar powered cars cause pollution? 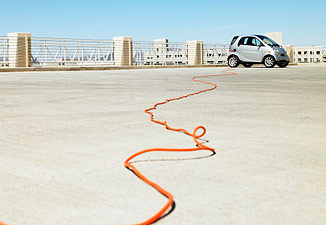 How much do you know about solar powered cars? Check out these alternative fuel vehicle pictures to learn more.
Ryan McVay/Thinkstock

Despite their environmentally friendly design, there's always been one caveat to plug-in electric vehicles. While they don't emit any carbon dioxide as they're driven — in fact, all-electric cars don't have tailpipes — they do use electricity that's mostly generated by burning fossil fuels. These fossil fuels do, in fact, emit carbon dioxide, which means that anything using that electricity is indirectly causing pollution.

One clever way around this conundrum is to generate the electricity on the car itself, using photovoltaic solar panels. Solar radiation hits the Earth at an average equivalent to 4.2 kilowatt-hours of energy per square meter of Earth. Over the course of a year, this adds up to about a barrel of oil per square meter, which doesn't seem like much until you realize the Earth's surface covers about 510 million square kilometers, or about 197 million square miles.

Much like electric cars, solar power has hidden carbon costs, specifically in the production of the panels used to capture the sun's radiation. In the mid-2000s, for example, fears emerged that cadmium telluride, one of the most promising photovoltaic compounds (a combination of metals that produce electricity when exposed to solar radiation), might be a more dangerous pollutant than fossil fuels.

Cadmium is a carcinogenic heavy metal that poses a health risk to lungs, kidneys and bones. The air, soil and water pollutant also has a tremendous amount of staying power in the environment. But as much as it poses a health risk, a group of researchers from the National Renewable Energy Laboratory point out that the relative risks are still light when compared to the use of fossil fuels. In the agency's 2008 study, researchers found that emissions from production of cadmium telluride solar cells were about 300 times less than the toxic emissions of coal-fired power plants.

Still, there is the matter of the creation of those solar cells; it takes fossil fuels to power the production of solar cells. From the diesel that powers the earthmovers mining the cadmium to the electricity produced by burning coal that powers the solar cell plants, there is some carbon dioxide output associated with solar power. Again, however, it looks like solar power is still more eco-friendly than traditional sources of power. The same 2008 study found that when looking at the overall use of electricity generated by solar power compared to electricity generated by fossil fuels, solar power represents a 90 percent reduction in air pollution.

It looks like while solar powered cars are indeed responsible for different types of pollution, solar energy is still a big improvement in pollution reduction over fossil fuels.