A rechargeable battery is useless unless you have a place to recharge it. If you're running out of juice in your electric car, you can't just make a quick stop at the local gas station -- unless your local gas station has a place where you can plug it in. Unfortunately, recharging the large array of batteries in an electric car can take several hours, and most gas stations would prefer that you didn't block their lanes for
that long.

The best solution to the recharging problem is to take the car home in the evening and plug it in, similar to the way you might plug in a laptop computer or digital music player, so that it can recharge overnight. EVs will come with charging systems that allow them to recharge from a standard electric socket so that the next morning you'll be ready to hit the road again. Although at least one company claims to be developing systems that can recharge an electric car in 10 minutes, existing rechargers take between
3 and 10 hours to bring an electric car battery up to full strength using normal home electricity
[source: Fehrenbacher]. 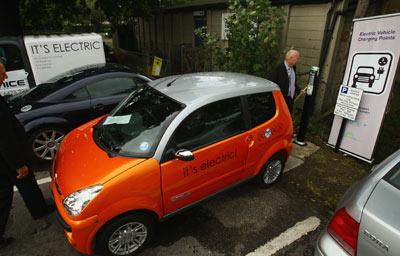 Daniel Berehulak/Getty Images
A man charges his electric vehicle at a charging station in London, England, on August 13, 2008.

Once an EV has been recharged, how far will it go before it needs to be recharged again? This depends on a number of factors, including the type of battery in the vehicle. EVs using lead-acid batteries have the shortest range -- around 80 miles (128.7 km) on a single charge. NiMH batteries turn in a better performance, with a range of about 120 miles (193.1 km) per charge. This is where lithium-ion batteries excel, with a range of more than 220 miles (354.1 km) per charge -- using the Tesla Roadster as an example. If driving distance is the most important consideration, lithium-ion batteries are the ones
to choose.

The range of an EV can be extended even further with a technology known as regenerative braking, which uses the kinetic energy of the car's brakes to recharge the battery on the fly. Under optimum driving conditions, regenerative braking can extend the car's range up to 50 percent, though in most situations the gain in driving range will be smaller.

But what if you want to take a longer trip in an electric car and won't be home for an overnight recharging session? Will there be somewhere you can plug it in? Very few recharging stations exist at present, but manufacturers of electric cars are planning to build charging stations so that the infrastructure will be in place when customers start driving electric vehicles. Tesla Motors, the maker of the all-electric Tesla Roadster, has made a deal with a major hotel chain to have recharging stations available for patrons who want to recharge their Roadsters overnight. One advantage of recharging stations is that they may be able to recharge cars more quickly than a home recharging system can, though it's unlikely that vehicles will be in and out as quickly as at a gas station. Unfortunately, it may be a while before enough recharging stations are available to keep EV owners recharged on long road trips. In the near future, EVs will be best suited for commuting to work or school and for local travel and shopping trips. When used in this manner, the car will be tucked safely in the garage each evening for an electrical fill-up.