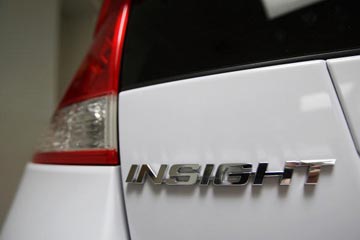 When most people bring up the subject of hybrid cars, the Toyota Prius is most likely the first and most prevalent example that comes to mind. It's consistently on year-end best of lists for performance, fuel efficiency and overall satisfaction, and its mid-range price has made it fairly reasonable for most drivers.

However, despite the Prius's dominance, the popular car wasn't the first modern hybrid vehicle to hit America's roads and make an impact. That honor belongs to another Japanese carmaker -- Honda Motor Company. In 1999, Honda began producing the 2000 Honda Insight, the first gasoline-electric hybrid to be sold in mass production to U.S. drivers.

Using a small electric motor to assist the gas engine, the Insight quickly moved to the top of the Environmental Protection Agency's list for best fuel economy. The Insight also introduced Honda's Integrated Motor Assist (IMA), the technology the company would end up using in all of its hybrid powertrains ever since. The system included several aspects that would become the core of hybrid technology, including regenerative braking, nickel-metal hydride battery packs and microprocessor use.

Honda stopped producing the Insight in 2006, but the hybrid's hiatus was short-lived. The automakers have refreshed the Insight for the 2010 model year, introducing a new second-generation design to drivers. The hybrid will still use the Integrated Motor Assist system it first brought to the states, but it will also include newer features such as the Ecological Drive Assist System. The system is also known as Eco Assist -- a visual feedback system meant to help drivers improve their fuel economy and overall driving habits. In an effort to entice drivers and rival the Prius, Honda's Insight will be the least expensive hybrid car on the market, priced at $19,800 for the base version.

So how does the 2010 Honda Insight work? How fuel-efficient is it? What has Honda changed inside and under the hood for the Insight's second generation? 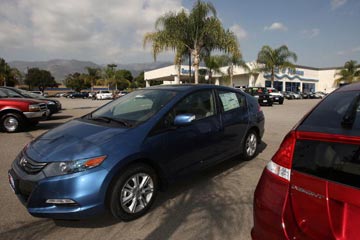 The design of the 2010 Honda Insight is similar to that of the Toyota Prius -- but what does it look like under the hood?
David McNew/Getty Images

The Honda Insight's appearance has changed gradually over the years, but compared with its origins the 2010 Insight looks like a completely different car. The original Insight concept began as early as 1997, when Honda introduced the Honda J-VX. A small, lightweight, sporty design, the J-VX was a two-door, four-seater with tapered wheel wells and a flat back. This morphed into the more-recognizable Honda VV, the pre-production prototype of the 2000 Insight. The emphasis was less on sports cars and more on fuel efficiency and aerodynamics, evident in the characteristic extension of the hybrid's aluminum body over the rear wheel wells. Aside from a few refinements in headlamp shape and other physical appearances, the design of the first-generation Insight was basically in place.

So how does the new 2010 Honda Insight compare in design to the original? At first glance, a lot of things have changed. Most notably, the rear wheel wells on the 2010 Insight aren't covered up. The grille and headlight design of the new Insight is also significantly different, boasting a more rounded, sectional look than the subtler curves of previous models.

One thing many reviewers have pointed out while test-driving the 2010 Honda Insight is that is bears a suspicious resemblance to its rival, the Toyota Prius. Both vehicles have a gradually sloping profile, one that begins subtly at the edge of the hybrid's hood, peaks above the front seat headrests, and continues downward in a similar fashion before cutting off quickly at the back. Both cars have four doors (in the case of the Insight, an upgrade from the previous generation's two-door design) and both are hatchbacks, too.

There are, however, a few distinctions. The 2010 Insight is considered a compact car, not a mid-sized car like the Toyota Prius, and is therefore considerably smaller. The interiors are generally dissimilar, too, especially in regards to driver controls and feedback. The Insight includes a special Multi-Information-Display (MID) that gives drivers typical statistics like miles per hour and temperature, but also goes the extra mile to provide specific data like fuel economy. 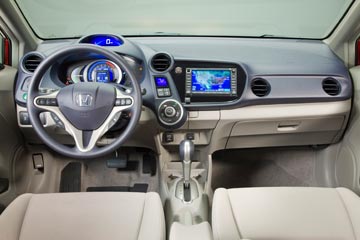 The 2010 Honda Insight gets an average of 41 miles per gallon.
Wes Allison/The Canadian Press/AP Images

The Honda Insight has been out of the automotive game for about three years. What's happened during its absence? As Honda brings back its original hybrid car, how does it stack up against other hybrid cars?

Honda has equipped the 2010 Insight with a continuously variable transmission (CVT), a system that exchanges the gears found in typical automatic transmissions for a seemingly simple metal belt that runs between a pair of pulleys. One pulley stays in place, while the other can move with the help of a hydraulic cylinder. When the pulley moves, the belt moves higher or lower on the pulley depending on how fast you're driving, and this changes the gear ratio. It's a lot like changing gears while riding a mountain bike, except in a CVT system, there aren't any steps and there's an infinite number of ratios. This makes a vehicle using a CVT system slightly more efficient, increasing its fuel economy by about one or two miles per gallon (.43 or .85 kilometers per liter). That might not sound like much, but fuel economy is highly dependent on good driving habits -- any extra bit of efficiency engineers can squeeze out of a single system helps, and that's exactly why many automakers like Honda are adding CVTs to their cars.

The Insight's engine is, of course, coupled with an electric motor for extra power. Honda's system is known as the Integrated Motor Assist (IMA). The IMA is mounted right between the engine and transmission, and the motor also provides regenerative braking, electric start-up and start-stop technology to improve fuel efficiency during idle stops.

Up against similar hybrids like the Toyota Prius, the 2010 Honda Insight isn't quite as efficient -- the Prius gets around 50 miles per gallon (21.3 kilometers per liter), and that's nearly 10 miles per gallon (4.3 kilometers per liter) more than the Insight. Whether or not the Insight's lower price will attract more buyers, however, is yet to be seen.