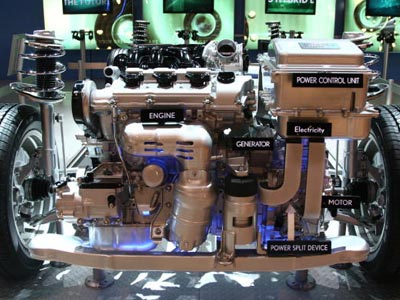 When most people buy a hybrid car, they usually do so with the understanding that there's going to be some kind of compromise between power and eco-friendly driving. The reason hybrid vehicles have become such a buzz topic and a go-to model for the auto industry recently is because of that compromise. As concerns increase over global warming, caused in part by carbon emissions resulting from vehicle fuel consumption, the power provided by a gasoline engine coupled with the fuel-saving qualities of an electric motor seem like the best possible combination.

But are fuel-efficient vehicles significantly slower than regular cars? To see if hybrid cars crawl on the road rather than zip along, we have to look into hybrid engine performance. Generally speaking, the engine in a hybrid car is almost always smaller than the engine in a comparable non-hybrid car. Smaller engines usually equal less horsepower and less torque. To get good fuel efficiency, hybrids operate from a standing start using only the electric motor, which typically provides much less horsepower and torque than a gasoline-powered engine. These two systems work together, however, to ensure hybrids can save fuel in the city and drive at faster speeds on the highway or even climb steep hills.

In short, hybrid cars won't be maxing out at 45 miles per hour (72 kilometers per hour) on the highway, endangering -- or at the very least, angering -- other drivers on the road, but they won't go quite as fast as most regular cars, either. While many all-electric vehicles have significantly lower top speeds and some are even a little bit unstable on the highway, hybrid cars get enough power from the gasoline engine to go as fast as 100 miles per hour (161 kilometers per hour). The real matter for hybrids is in acceleration. Since the smaller electric motors that most automakers use don't produce much horsepower, a relatively fast hybrid car can go from zero to 60 miles per hour (97 kilometers per hour) in about six seconds, while a more typical hybrid car's zero to 60 time hovers around the 10 second mark. For some people, that's a little too slow.

How are the carmakers responding? Well, some are developing faster hybrid cars with larger, V-6 engines and more powerful electric motors. Hybrid technology developer Frazer-Nash Research and Italian design firm Italdesign Giugiaro, for instance, worked together to build the Namir, a concept plug-in hybrid that can go from zero to 62 miles per hour (100 kilometers per hour) in 3.5 seconds and has a top speed of 187 miles per hour (301 kilometers per hour). The Namir's range is also 1,200 miles (1,931 kilometers), so anyone with the need for speed and an itch for green driving should look toward Italy.