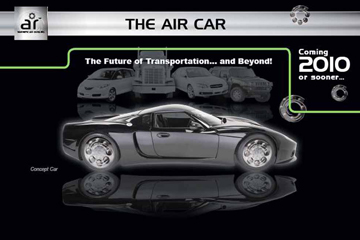 The images that circulated with the press releases were of the GTM Supercar available from kit car manufacturer Factory Five. The magnetic air car never made it to the prototype stage. Want to learn more? Check out these concept car pictures.
Courtesy of Magnetic Air Cars, Inc.

Hey, kids! Today's vocabulary word is vaporware! This means that a company has created a lot of hoopla about a product, but then the company never releases or even cancels that product. It just evaporates.

So, can you use today's vocabulary word in a sentence? How about this one: The magnetic air car that was promised in 2008 and expected in 2010 never materialized -- meaning that by 2012, this technology was vaporware.

According to press reports, Magnetic Air Motors of San Jose, Calif., was creating a fuel-less car that used compressed air and magnets to power the vehicle. The company was careful to point out that their idea was different from Tata Motor's air car prototype, which used pistons. The Magnetic Air Car lived up to its name. It wasn't called the Piston-Pumping Air Car, after all.

Its name was all it lived up to, however. Even the images that circulated with the press releases were of the GTM Supercar available from kit car manufacturer Factory Five -- a car that's truly available at a price of about $20,000 [source: Factory Five].

But the Magnetic Air Motors car wasn't even entirely the first of its kind. In 1932, a man named J.M. Custer built a prototype vehicle which ran on compressed air. Of course, the people behind the modern Magnetic Air Car knew this, and even based their patent on Custer's prior technology.

But here's the funny thing about vaporware: It's almost like Freddy Kruger and his claws or Jason and his machete; it can always come back when the time is right. Let's take a quick look at the technology behind the Magnetic Air Car so we'll know it when (if) we see it in the future.

Let's walk through the process of getting the Magnetic Air Car fired-up and ready to drive.

First, at the turn of a key or the push of a button or the swipe of a card -- or however this car was supposed to start -- a 12-volt battery (similar to the one in your car) sparks the vehicle to life.

The battery starts a magnetic motor, which runs a pump compressor that works to fill two 10-gallon storage tanks with air compressed to 200 pounds per square inch in 10 minutes or less. The compressed air then runs four air-bearing turbochargers, which according to the company can reach speeds of one million revolutions per minute and don't need maintenance for 100 years. This is where the latest in punctuation might come in handy -- the interrobang: ?!

The compressed air is sent to a pneumatic torque converter, which transfers the power generated by the Air Cycle Machine (as the company called it) to a transmission and then to the wheels. And voila! You're driving a magnetic air car.

In theory, since a prototype was never seen in public, the Magnetic Air Car would never have to be refueled, would have unlimited driving range, and thanks to a water filtration system that was said to clean the air as it was recycled within the system, any air leaving the magnetic air car would have actually been cleaner than the air that went into it. Oh, and buyers were also to receive a free unicorn with purchase.

To be honest, the technology doesn't seem that far-fetched. It's basically an electric car with air tanks rather than lithium-ion batteries. But the claims of unlimited driving range and no maintenance for a century make it seem like it's creeping into perpetual motion territory, which should make most of us turn a skeptical eye.

Magnetic Air Motors did indeed file a patent for this propulsion system in 2008, and the patent was granted in 2011. In other words, there's still a slim chance this thing could leave the realm of vaporware and become (at least) a prototype in the real world. Maybe.

I ran up against a surprising grammatical problem when writing this article: What tense does a person use when writing about a car that never existed, but might still come into being? Past tense, because all of the details we know about the car came from 2008? Conditional tense, since it might one day be a real car? Future tense, which would express optimism and hope for this radical technology?

In the end, I went with present tense. If you want to get really nerdy about it, it could even be referred to as a kind of "historical present," which is often used in books to make ancient events seem current and fresh. It puts the reader in the story, and I wanted to put you in the car. Also, I just had to make a choice.