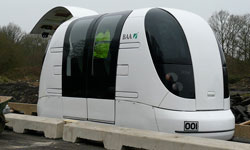 A PRT vehicle on a test track.
Skybum/Wikimedia

Will Americans ever embrace an innovative form of public transportation? That's questionable. If you've ever listened to Chuck Berry, the Beach Boys or Bruce Springsteen sing about roaring down the highway, then you know that Americans love their cars -- and the sense of personal freedom that comes from having one's own set of wheels.

Indeed, U.S. Department of Energy data shows that Americans own nearly 842 cars per 1,000 people, a higher proportion than any other nation on the planet -- way more than the 593 cars per 1,000 Western Europeans, and the 36 cars per 1,000 Chinese [source: U.S. Department of Energy]. Each American drives, on average, roughly the equivalent of four coast-to-coast road trips across the U.S. in a lifetime, and spends nearly an hour a day behind the wheel [source: U.S.Department of Transportation]. Of the 1.1 billion little trips they make each day -- to and from work, shopping, dropping the kids off at piano lessons or laser tag -- they make 87 percent of them in their own personal vehicles [source: Bureau of Transportation Statistics]. So, yeah -- "Baby, we were born to run."

The problem is that this near-obsessive love of the automobile has plenty of downsides -- pollution, the cost of fuel, traffic jams, fender-benders and crashes. Using public transit could remedy a lot of those problems; unfortunately, many Americans seem to have an aversion to buses and trains. But what if they had a form of public transit that actually was a lot like riding in a car?

That's the potential promise of Personal Rapid Transit (PRT) systems. PRTs use small podlike electric rail vehicles -- think individual versions of the monorails at Disneyland -- that are designed to provide the convenience of automobiles, without the drawbacks. The concept isn't really new. Since 1979, a PRT system in Morgantown, W.Va., has been carrying as many as 16,000 people a day back and forth between downtown and the West Virginia University campus [source: Demerjian]. Heathrow Airport outside London now has a PRT system to transport people traveling from its parking area to the terminal. But an even more elaborate system is envisioned by the Italian design firm, Pininfarina, and a Korean urban mobility company, Vectus. They've drawn up plans for one that would function inside a city like a robotic taxi system, with riders electronically summoning vehicles to take them wherever they want to go [source: Weiss].

As energy prices and environmental woes rise and roads become more congested, transportation planners are looking more and more at PRTs. They're hoping people will embrace these five reasons why a PRT wouldn't be that much different from riding in your own car.