How much does auto maintenance cost over time? 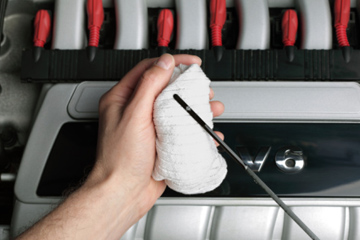 Is it cheaper to fix the car you already have or simply buy a new one?
iStockphoto/Thinkstock

Wow. Is that "check engine" light on again? Didn't you just have that looked at? Come to think of it, your car is approaching that age, isn't it? A bit more grumble in the engine, a touch more sway in the suspension -- you hate to admit it, but every time you take old faithful into the shop, the same thought tickles the back of your brain: Is it time for a replacement?

How much is too much to spend on repairs? It's a question we've all had to ask at one point or another. Perhaps it would help to have a basic sense of what auto maintenance typically costs over time.

The average American household owns 1.9 vehicles and spends around 1.5 percent of its annual income on auto repairs. In 2004, the standard family unit earned $54,453, which means they laid out around $817 annually on repairs, or $408 per vehicle. That number does not include the 3.7 percent spent on gasoline and motor oil ($1,007 per car), or the 2.2 percent ($599 per car) shelled out for insurance [source: U.S. Bureau of Labor Statistics].

Is that a lot? It depends on how you look at it. Like all complex machines, cars and their components have projected operational lifespans. Manufacturers anticipate that some components will fail often and that you'll replace them as part of routine maintenance, while others will last longer. The long-life components will generally be more costly to replace, but even those might not be so bad if you think of the cost spread over the lifetime of your car -- spending $500 to $800 to replace an alternator stings a little less if it's already kept you humming along for 75,000 to 100,000 miles (120,701 to 160,934 kilometers).

If you own your car long enough, you'll have to replace or rebuild an awful lot of it, but that doesn't mean it's necessarily a bad idea. After all, new cars are expensive. They also depreciate an average of 45 percent over the first three years of ownership -- between 48.3 and 79.3 percent over the first five years [sources: Weisbaum and Clarke].

In the next section, we'll look at why preventative maintenance saves you money in the long run. We'll also explore why, if your car is more broken-in than broken-down, it's probably cheaper to keep her around a little while longer.

Spending more than $400 annually on maintenance and repairs may sound like a lot, but it's nothing compared to the added expense of buying a new car, especially if your current car is paid off. In fact, by some estimates, every five years you drive your car after paying it off saves you the monetary equivalent of a new car.

In other words, for the cost of owning a new car for one year, you could own a paid-off car for five years, drive it into the ground, and still have money left over for tolls.

According to Consumer Reports, the average life expectancy of a new vehicle is around eight years or 150,000 miles [source: Weisbaum]. A well-maintained car also means a safer trip for you and your loved ones. And who can put a price on that?

For more information about preventative auto maintenance and other related topics, follow the links on the next page.

The following is a list of some key areas requiring preventative maintenance. Consult your owner's manual for information about when to replace specific fluids and components:

Is the end of the month really the best time to buy a car?
Can the U.S. Navy turn seawater into jet fuel?
How Often Should I Replace My Car Battery?