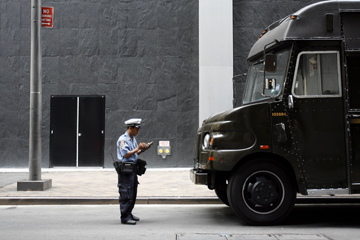 An officer writes a parking ticket for a UPS truck in New York.
AP Photo/Seth Wenig

Ask anyone who lives in a city and they'll tell you a good parking space can be a prime piece of real estate. In metro Boston, as well as Chicago and New York, spaces are marked as owned by intrepid land-grabbers with lawn chairs, furniture and the occasional savage dog. Something as good as a prime parking spot is worth fighting for.

Cities think the same, too. But they protect their spaces with a different tactic -- they hit the wallet. However, just how much they hit the wallet is a complex alchemic formula balancing revenue generation and behavioral science. Some cities come up with gold while others are left with lead. Prices can range from about $10 to $20 in New Hampshire cities, to more than $50 in areas of metro Los Angeles.

And this leads to the question of an average price of a parking ticket, which, in turn, leads to the answer, "It depends." But there are a few constants among the variables.

First off we'll take the idea of a parking ticket being one issued for an expired meter, as opposed to parking in a no-standing zone, fire lane or a car illegally parked in a handicapped spot. Those have different fee structures, though a similar logic.

How much more expensive is where the science ends and more of the alchemy enters the formula. Stanley said the idea behind Manchester's expired meter fee was to change parking behavior in the downtown area of the city. "It's to keep people from parking on the street all day, every day," she said.

The "people" she refers to are the workers in the downtown area; lawyers, shop owners, employees, essentially people who work in that section of the city. Instead, she said the fee should deter enough daily parkers to open up spaces for the shoppers, who need those spaces to buy goods and services from the businesses. It's this logic, she said, that's often the hardest to make people understand. "People think if you raise [expired meter] rates it will hurt the businesses," she said. "We're actually trying to help them."

Of course, the rates also generate revenue for the parking enforcement department to pay meter readers and other staff, something Stanley said was necessary, but secondary to the idea of changing parking behavior. "If you raised rates too much, you could hurt business instead," she said.

For more information about parking tickets, the cost of car ownership and other related topics, follow the links on the next page.