Do red-light cameras save lives? 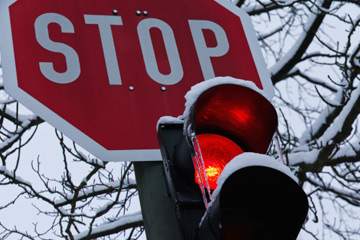 Numbers rarely lie, and the numbers produced by the 2011 Insurance Institute for Highway Safety (IIHS) say red-light cameras do indeed save lives.

While the logic is straight-forward -- fewer violations, fewer accidents, and fewer deaths -- detractors say the use of the cameras can move away from the original safety intent and shade into a revenue-generating tactic for the 500-plus cities across the country now using them. Indeed, one study from the University of Southern Florida College of Public Health claims the cameras can, under specific circumstances, increase the number of accidents and possible related fatalities.

Yet since the first red-light cameras were installed more than a decade ago they've helped reduce the number of accidents at the intersections where they're used as well as other areas of large cities. While their ultimate use and presence can be argued, the results of the IIHS study show they are effective.

Keep reading to find out more about the study's results and how the cameras work.

How many lives saved? 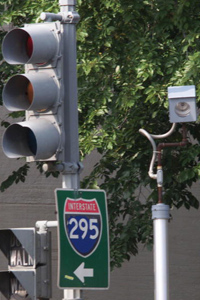 A camera is placed near a traffic light for drivers who run red lights on Constitution Avenue in Washington, DC. The camera will take a picture of the car and license plate and the offender will be mailed a citation.
Mark Wilson/Getty Images

Generally speaking, red-light cameras are part of a linked system comprised of three main components: the camera, a trigger and the stop lights themselves.

A trigger, usually an induction coil, is embedded in the roadway at the intersection stop line. When the signal is red, or even sometimes yellow depending on the community, electricity is run through the coil. This creates a magnetic field that reacts with a car's metallic mass. Changes in the field, such as running a red light while it's on, trip a switch. This switch, in turn, triggers two of four cameras generally mounted at each corner of the intersection. The cameras shoot photos of the violator's license plate and/or the driver's face. The photo is processed and a ticket is sent to the traffic scofflaw.

Recent advances in technology are doing away with induction triggers and integrating more technology into the system. Some cameras now keep a constant video surveillance of an intersection and know when someone runs a red light. Added to this is the ability to calculate the vehicle's speed giving the authorities the chance to act on, and ticket, two possible violations.

According the IIHS study, red-light cameras saved the lives of more than 150 people over the five-year period of the study, which focused in 13 major cities in the United States. The study added that if the 99 largest cities in the country had installed the cameras the number of lives saved would have jumped to more than 800.

In more specific terms, the study found the cameras reduced the rate of fatal red-light running crashes by 24 percent, and had a collateral effect of reducing all fatal crashes at signalized intersections by 17 percent.

Some studies have indicated exceptions to the IIHS results. As mentioned on the first page of this article, a report by the University of Southern Florida College of Public Health, and published in the 2008 Florida Public Health Review, said red-light cameras could cause more accidents than they prevent. Though drawing from the results of a 2002 IIHS red-light camera study, the authors concluded that the state's elderly drivers often could not react quickly enough to stop at lights and this reduced reaction time, coupled with a red-light cameras split-second speed, could result in more crashes as older driver's try to make fast stops, as well as a higher cost to the public in the terms of property loss, tickets and higher insurance rates.

The USF study instead suggested reengineering intersections, increasing the time yellow lights are on, and other methods for reducing signalized intersection crashes. They also questioned the results based on the IIHS's close ties to the auto insurance industry.

Letters regarding the USF study, and the 2002 IIHS study, both support and condemn both reports, their sources, methods, analysis and presentation.

The idea that red-light cameras save lives is not in question. No matter how many ways the numbers are looked at or interpreted -- the fact is that some people are walking and driving the streets today that may not have otherwise thanks to their presence.

Can a car really be death-proof?
How Tires and Wheels Work
How Axle Spring Seats Work