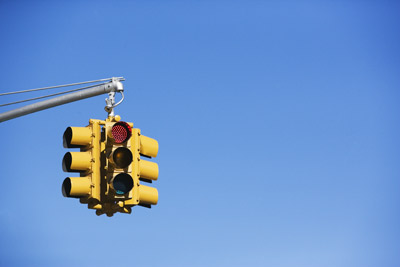 One of the best ways to improve your fuel economy is to change the way you drive. Speeding, accelerating and braking hard can deplete efficiency by 33 percent, according to the Environmental Protection Agency (EPA) [source: fueleconomy.gov]. Why? When you stop, start or accelerate, your car has to overcome inertia. Inertia is the resistance an object has to a change in its state of motion. In order to get moving, or to stop, a car has to overcome inertia. You've probably heard that objects in motion tend to stay in motion, and objects that are stopped tend to stay stopped. That's because of inertia.

Overcoming inertia requires energy. When you're talking cars and energy, you're talking gas. You can use less energy to overcome inertia if you do it slowly. What would make you more tired: pulling a heavy wagon slowly from a stop to an all-out run, or pulling the same wagon immediately to a sprint? Pulling the wagon slowly lets you build momentum to help overcome inertia, using less energy. In your car, you should accelerate slowly from stops, allowing the car's momentum to help it accelerate.

Once the car is in motion, you should try to preserve that momentum by avoiding situations where it can be lost. Say you're driving down the road and see a light up ahead turn from yellow to red. Rather than keep your foot on the gas and brake at the last second, you should take your foot off the gas and slowly approach the light. Not only will coasting save gas, but you might not even have to come to a full stop before the light turns green again, meaning that your car will have to overcome much less inertia to get going.

The speed at which you drive on the highway, where stopping and starting aren't likely to be a problem, also impacts your fuel efficiency. The EPA says that most cars run at maximum efficiency at 60 miles per hour, and every five mph over 60 decreases efficiency by 6 percent. So on your next road trip, slow down. You'll make up the time by not having to stop for gas as often.

Next time you're driving around and smell some delicious fried food, don't look for a restaurant as the source. Some alternative fuels are going green, but smell golden brown. Read on to find out more.

There's green driving, and then there's really green driving. Hypermilers are people who strive for incredible feats of fuel economy by changing the way they drive. By modifying how they stop, start and cruise on the highway, some are even able to get 75 miles per gallon.