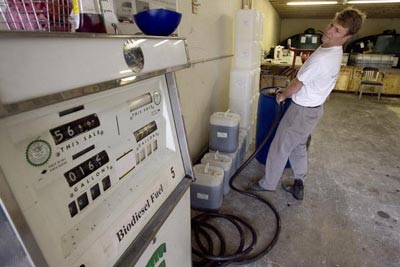 A man fills up his 55 gallon drum with biodiesel fuel at the Biofuel Oasis in Berkeley, Calif.
David Paul Morris/Getty Images

The other major biofuel, biodiesel, is used, of course, in diesel engines. Like ethanol, it's derived from renewable sources -- in biodiesel's case, vegetable oils or fats -- but, unlike ethanol, it can burn in diesel engines whether it's a blend or pure biodiesel (B100). Many people are surprised to learn that Rudolf Diesel, the inventor of the diesel engine, originally thought of vegetable seed oil as the engine's main fuel.

­Raw materials and transportation decide most of the price for biodiesel. The most common ingredients used to make biodiesel are soybean oil and yellow grease, the latter of which comes from soy oil, canola oil and the other oils used for cooking french fries and other fried foods. Fast food restaurants recycle and reuse these oils as much as they can, but after a while it doesn't serve a cooking purpose. Biodiesel producers can then purchase the used yellow grease and convert it into biodiesel. Acquiring and processing the soybean oil and yellow grease accounts for as much as 80 percent of the price. Biodiesel also gets a $1 per gallon discount on federal excise tax, which lowers the overall price for consumers.

The price of biodiesel ultimately depends on the blend. B20, for instance, cost about $3.08 in October 2007, three cents lower than regular diesel's $3.11 average at the time. B100, on the other hand, cost higher at an average of $3.38, due to the increased amount of production that goes into making pure biodiesel.

Many companies that use vehicles with diesel engines are switching to biodiesel because of the potential to save money. Newer diesel engines rarely have to be modified to use biodiesel, and it doesn't cost much to retrofit older ones. In Oregon, for example, construction companies that use diesel engines and modify them with retrofit devices for improved performance are eligible for as much as 50 percent in tax credits [source: Oregon Environmental Council]. With better fuel efficiency and cleaner emissions, biodiesel looks to help many businesses using diesel engines, but it could affect more than just big trucks on the highway. The production and profit potential for biodiesel, according to the University of Wisconsin's Center for Sustainability and the Global Environment (SAGE), is huge, and the department suggests in a report that countries could produce as many as 51 billion liters a year.

To learn more about propane, natural gas and electricity, read the next page.