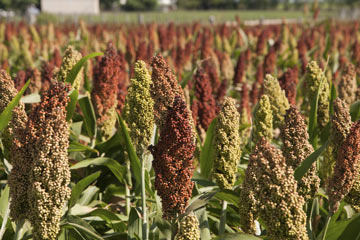 That's not wheat! It's sorghum! Check out these alternative fuel vehicle pictures to learn more.
iStockphoto/Thinkstock

Alongside a country road in rural Kentucky, it's pretty common to see rows of corn stretching all the way to the horizon, but all of those green stalks might not actually be corn plants. On closer inspection, you wouldn't see any ears, and the head of the plant looks a little bit more like wheat than corn [source: In the Field]. What you're probably looking at is sweet sorghum.

The sorghum plant is actually a grass that's native to Egypt and spread throughout the rest of Africa [source: Oklahoma 4H]. Farmers in the U.S. have been growing sweet sorghum and using the stalks to produce syrup since at least the mid-1800s [source: Wittgreve]. Sorghum is a grain, and sweet sorghum is a specific variety selected for its higher sugar content [source: Food and Agriculture Organization]. What makes sweet sorghum especially attractive to farmers is its drought resistance. It doesn't require a lot of water, so it's an ideal crop for areas that don't see a lot of rainfall, like parts of China and Africa as well as in the U.S.

Processed syrup from the sorghum plant is amber in color and looks a lot like maple syrup [source: Mallon]. In fact, you can basically treat it like maple syrup in recipes, and some folks even use it to top their pancakes. Farmers also mix the leavings from making sorghum syrup into animal feed, but food for people and animals isn't the main use for sweet sorghum. It's become a cash crop since researchers discovered that we can use sorghum syrup to produce biofuels.

As the U.S. suffers from crippling droughts in many of its farming regions, sweet sorghum's popularity is skyrocketing. Sweet sorghum farming used to take place mainly in the southeast United States, but now farmers in the Corn Belt are jumping on the sorghum train as droughts destroy their corn crops. Sweet sorghum's multiple uses -- as food and fuel -- make it an attractive alternative to corn for many farmers [source: Baragona]. 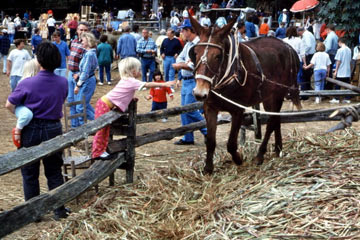 Visitors to this Tennessee fair watch as sorghum molasses is made the old-fashioned way using a mule to power a press which squeezes the juice from sorghum stalks. The juice is then heated and reduced down to syrup.
Robert Alexander/Archive Photos/Getty Images

Sweet sorghum is just one type of sorghum plant, and the higher sugar content is what distinguishes it from other types of sorghum. There are several varieties of sweet sorghum, and farmers breed these specifically for their sweetness [source: Bitzer]. Sorghum syrup producers crush the stalk to extract the sweet juice, just like sugar cane. After extracting the juice, they cook it down to create the sorghum syrup -- also called sorghum molasses -- that stocks store shelves [source: UGA Extension].

Sorghum syrup is also is more nutritious than some other more refined sweeteners. Unlike table sugar, it contains iron, calcium, and potassium along with other micronutrients [source: National Sweet Sorghum Producers & Processors Association].

We've been cooking with sorghum syrup for hundreds of years, but what's really made this crop catch on in recent years is its potential as a biofuel to replace or supplement petroleum in our fuel supply.

About a third of the sorghum grown in the U.S. in 2011 was processed into ethanol, about 71 million bushels [sources: Schroeder, USDA].

Traditionally, corn has been the biofuel crop of choice, but sweet sorghum is a much more versatile plant. Not only is it extremely drought tolerant, but as Christopher DeMorro, site director at Gas 2.0, an alternative energy Web site, points out, "What makes it really interesting is that sweet sorghum can be grown in a wide variety of temperate and tropical areas." That versatility and its drought tolerance mean that farmers are starting to plant more sweet sorghum, especially for ethanol and biodiesel production.

Producing biodiesel -- as opposed to ethanol -- from sweet sorghum is an even more recent development. In May 2012 Biofuel company Amyris announced results from a successful pilot program using sweet sorghum [source: Schroeder]. The big advantage over ethanol, DeMorro says is that any diesel car can run biodiesel with minimal modifications. "Usually it involves a special heating tank to make the biodiesel more fluid, unlike ethanol which requires an engine specifically built to accommodate it and even then usually needs to be mixed with regular gasoline."

As gas prices continue to rise, biofuels like ethanol and biodiesel are becoming more attractive, and finding new crops to produce biodiesel is going to be critical to our energy future. The main reason that we've relied so heavily on corn for biofuel in the U.S. is that thanks to subsidies and other government incentives we were already growing so much of it [source: Nicholson]. What makes sweet sorghum even more attractive than corn for producing biofuels is that it answers some of the controversial questions surrounding biofuel production and its social and environmental impacts.

Sweet Sorghum and the Biofuel Controversy

Producing fuel from food crops is highly controversial. For every acre of land growing corn for biofuel, that's one less acre of land growing food for people. There's also the impact of growing the crop itself. Farming can be extremely water-intensive, which is a big deal when so many areas are struggling with drought. You also have to consider the impact that crop production has on the soil.

The most well-known issue with biofuels is probably the food versus fuel problem. You might remember the "Tortilla Protest" in Mexico City back in 2007. When the price of corn exploded, quadrupling the cost of corn tortillas, a dietary staple in Mexico, many blamed biofuel production [source: Kennedy]. Just as with corn, growing sweet sorghum to produce fuel means that much less land to produce food, but thanks to a new hybrid sorghum plant, sweet sorghum could provide the best of both worlds.

Researchers have developed a hybrid variety of sweet sorghum that produces an edible grain [source: New Agriculturalist]. People can eat the grain and juice the stalks to create biofuel. Conventional sweet sorghum doesn't do double duty like this, but this new hybrid could be the solution. Right now, the byproducts of biofuel production from sweet sorghum can be added to animal feed, which means less waste and growing less corn and grain to feed animals [source: Chambers].

Sweet sorghum is also much more water-efficient than most biofuel crops. Producing ethanol from sweet sorghum uses about two thirds the amount of water of corn and one seventh the water of sugar cane. That's a big deal in drought-stricken areas both here in the U.S. and overseas. India has been a major producer of ethanol from sweet sorghum, for example, and a company in the Philippines started producing large amounts of sorghum ethanol in May of 2012 [source: Gomez].

Like any other crop, sweet sorghum has some drawbacks. There's the problem of mono-cropping: planting the same crop in the same fields year after year. This isn't good for soil health, and it's as much a problem with mass-producing sweet sorghum as it is with corn [source: Remvos]. The solution to this problem is rotating the crops, giving the land a "break" every two years and planting something complementary like alfalfa to help improve the soil.

Grain sorghum (not the sweet kind) can be processed into flour and used for baking. It has the added advantage of being gluten-free and is available in health food stores [source: National Sorghum Producers]

I was thrilled when I found out that I'd get to write an article about sweet sorghum and all of its uses. I'm sort of a food nerd, and when I first learned that I'd be researching sweet sorghum, the first thing that came to mind was articles I'd read about sorghum crops helping farmers fight hunger in Africa. It was exciting to learn that on top of the humanitarian applications for sorghum, the sweet variety might just help us kick our fossil fuel addiction!