Is biofuel a reasonable (and safe) jet fuel alternative? 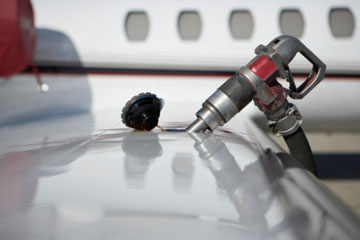 Alternative Fuel Vehicle Pictures Biofuel has already been used in experiments to power jets, and it may be used in place of jet fuel more frequently in the future. See more pictures of alternative fuel vehicles.
Jupiterimages/Comstock/Thinkstock

Not long ago, the answer to this question would have been no. But by spring of 2011, the leading international standards board is expected to approve a biofuel for use in jet engines.

The greatest obstacle, at this point, is not whether the fuel is safe, but whether it's possible to claim enough land to grow enough plants to feed the demand.

For the last few years, governments and corporations have been spending money, doing research and even flying planes with biofuel blends to give it a try. The key to safe jet fuel is the freezing point. If the fuel freezes at high altitudes, it won't work. For this reason, aircraft typically use kerosene.

The problem with some biofuels, such as biodiesel, is that they turn to gel at cold temperatures. To solve the problem, you can either engineer fuel heaters into the aircraft or not fly the plane too high. You can also use a more complicated refining process.

The most recent high-profile experiments came from Boeing, Lufthansa and Air New Zealand. Boeing reported that these flights occurred with no modifications to the engines or aircraft, and that the tests "demonstrated that biofuel blends meet or exceed all technical parameters for commercial jet aviation fuel, including freezing point, flash point, fuel density and viscosity."

What's extraordinary is how quickly this technology moved from the theoretical to the practical stages. As recently as 2008, an article in Scientific American pondered the practicality of running aircraft on renewable fuel.

The race to succeed has been driven by cost. According to the Air Transport Association of America, fuel cost is the biggest chunk of the major airlines' expenses. It makes up about 25 percent of the cost to run an airline, slightly more than payroll. The organization reports that every penny increase in the cost of a gallon of fuel adds an additional $200 million in yearly expenses.

The association showed drastic changes in price for the first 10 months of 2010 -- ranging from 10 percent to 25 percent. Though no one can predict for sure whether biofuels will actually be cheaper than fossil fuels after the complicated farming and refining processes, the chance to stabilize the wild price fluctuations could make it much easier to run an airline.