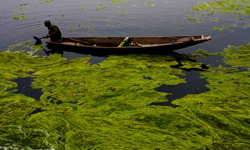 If you were to dream up a list of the all-time grossest possible experiences, swimming in an algae-gunked pool or pond would have to be pretty close to the top. An algal body of water is slimy, yucky, and it could obscure hungry things in the water that might like to take a bite out of you. Putting aside algae's highly important role in the food chain for just a moment, the stuff is plain nasty.

The phrase "lower than pond scum" has endured as an effective insult all these years for good reason.

But we're not here to put these micro-organisms ("algae" is the plural form of the singular alga) down any lower than their already humble position on the evolutionary chart. In fact, we're here to exalt them. That's because these critters could represent a significant breakthrough in helping the world cut its dependence on fossilized oil. As you may be aware, we can already use algae as a form of biofuel today.

What might not be common knowledge -- yet -- is the many different ways in which algae can serve as a fuel source. Sure it can run in a semi-truck in the form of biodiesel. But would you believe it could power the navy's next generation of fighting ships? Or that an airline flight you take in the near future may come courtesy of the oil derived from our single-celled pals?

A transition from traditional petroleum products to algae-based biofuels would bring with it an important side benefit, too: Algae provide what is known as a carbon sink. While alive, they take in carbon dioxide, one of the major greenhouse gases behind climate change, and release oxygen.

The technology to make all this happen isn't perfect. With methods available as recently as 2012, attaining cheap algae fuel production has been more slippery than the bottom of a dirty swimming pool.

But researchers all over the globe say they're zeroing in on methods to make algae easier and more productive to grow for fuel. If they're right, that means you can probably expect algae to play a direct role (eventually) in getting you from point A to point B. 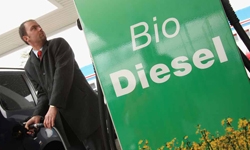 A man fills his car's tank with gasoline at a gas station that also sells biofuels on April 7, 2008 in Berlin, Germany.
Sean Gallup/Getty Images

Part of the pain of high gasoline prices is knowing that people in another part of the world have you over a metaphorical barrel. And no one, not even your president, can do anything about it.

The appeal is strong, then, of a fuel that could be homegrown, produced cheaply and used to thumb our collective noses at foreign oil lords.

Algae is not that fuel yet -- it's still too expensive -- but the potential is there.

In September 2009, a modified Toyota Prius completed a cross-country trip from San Francisco to New York with the help of an algae-based gasoline. The "Algaeus," a plug-in electric hybrid vehicle, made the 3,750-mile (6,035-kilometer) trek in just 10 days (allowing time for publicity stops). Sapphire Energy, one of the major companies working to develop algae as a cost-effective fuel, provided the proprietary mixture of algae-based gasoline for the trip. The concoction ran in the Algaeus without having to modify its engine and according to the drivers, "performed flawlessly" [source: Sapphire Energy].

Besides making a great headline, the journey of the Algaeus suggests that algae-based gasoline could one day become widely available as a "drop-in" fuel that runs in existing vehicles.

Big changes in maritime propulsion technology haven't come along all too often. First there was muscle power -- humans rowing oars. Then people learned to capture the power of the wind, and the age of the sail lasted for centuries. In the 1800s, sails were supplanted by a new technology, the steam engine. Steam, in turn, gave way to petroleum-powered internal combustion. Marine diesel engines however, while still prevalent, weren't the apex of ship propulsion technology in the 20th century. That honor went to nuclear-powered ships; a modern nuclear aircraft carrier can sail for 20 years before needing to refuel [source: NAVAIR].

Unfortunately, it would be impractical and prohibitively expensive to fit a nuclear power plant to most naval and civilian vessels. Waste disposal issues and the fact that nukes are massively complex mean you won't be attaching an atomic-powered Evinrude to your pleasure boat anytime soon.

So it's perhaps a bit ironic that the next leap in maritime propulsion might come from something as simple as algae. The U.S. Navy, for one, is betting big on the tiny organisms.

In July 2012, the Navy demonstrated its Great Green Fleet carrier strike group composed of the nuclear-powered aircraft carrier USS Nimitz and four support ships. With the exception of the Nimitz, all of the ships in the strike group and all of the attachment's jet planes, support planes and helicopters ran on a blend of renewable (algae and vegetable oil) and petroleum-based fuels.

Those eye-watering early costs are beside the point, according to Navy brass. The key point is developing an alternative fuel source -- any source -- that the military can use when its enemies possess the ability to choke off supplies of oil.

Secretary of the Navy Ray Mabus said, "Simply put, we as a military rely too much on fossil fuels. That dependence creates strategic, operational and tactical vulnerabilities for our forces and makes them susceptible to price and supply shocks caused by either man-made or natural disasters in the volatile areas of the world where most fossil fuels are produced" [source: U.S. Navy]. 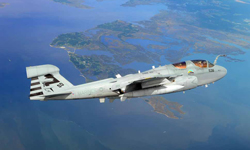 For heavier-than-air flying vehicles like airplanes, it takes a lot of concentrated energy to get airborne and stay up there for any decent length of time. For most of the powered-flight era, petroleum-based products such as avgas or jet fuel have served as the propellants of choice because of their high energy density. In other words, they pack a lot of punch in a relatively small package.

You know what's next -- yep, algae can be converted to fuel for airplanes, too.

Here are a couple algae aviation milestones for you:

Airplanes get us where we need to go in a hurry, but there's an expensive environmental trade-off: They're notorious polluters. So greening their fuel by blending it with cleaner-burning algae oil would seem to be a step in the right direction, right?

2: As a Strategic and Economic Tool

As we noted previously, the military thinks it's a wise idea to control a plentiful, renewable, domestic source of fuel for its fighting machines.

In the broader scheme of things, independence from foreign oil would mean that ordinary people wouldn't have to worry so much about gasoline prices. In 2011, the average U.S. family spent an all-time high of $4,155 on gasoline, or 8.4 percent of their budget [source: Smith].

Even if algae fuel doesn't catch on in the consumer auto market (perhaps, for instance, electric cars come to dominate the scene instead), it could still save ordinary people money. Tax dollars would no longer have to be spent on sending our military to protect corrupt, democracy-allergic (yet oil-rich) regimes.

Furthermore, many countries including the United States have made commitments to reducing their greenhouse gas emissions in coming years, even as the demand for pollution-causing fuel grows. Algae fuel could provide a cleaner-burning alternative to oil while still meeting countries' needs for industrial and transportation fuels to help spur economic growth.

If you thought swimming in algae-teeming waters was gross, wait until you hear this use for algae "fuel." As people food.

It sounds like (and, well, has been) something you'd see in science fiction. Just one example: The fictional crew of the Battlestar Galactica found salvation and survival on the Algae Planet when their fleet's conventional food supply was discovered to be contaminated. In the television space drama, the crew made no bones about how distasteful they found their emergency food source. But when you're starving, one of the first things you discard is a discriminating palate.

In reality, people already do eat algae on a fairly regular basis. Seaweed, a type of algae, is a popular dish in eastern Asian countries and has been winning converts worldwide.

Spirulina, a blue-green algae, is widely used as a dietary supplement for its high protein content and antioxidants, which protect cells from damage. When bought over the counter, people usually take it in pill or powder form. But there are some folks who grow it in tanks right at home and eat it fresh.

A number of algae development companies have taken severe lumps trying to grow algae as a transportation fuel. Far more profitable: Growing it as byproducts for use in fertilizers, animal feed, and yes, foods eaten by people.

But J. Craig Venter, the man behind the mapping of the human genome and an algae-development entrepreneur, has even more ambitious plans for algae. Among his many pursuits is a quest to find the most productive genes from algae and transfer them to other crops and microbes. One possibility is "meat" developed from algae genes that can be grown in a petri dish.

To be sure, realizing many of the promised benefits of algae as a fuel will take lots of time and loads of money -- perhaps billions -- in research and development dollars. Some people think it's no longer a worthwhile pursuit. But given all the enticing ways it can be used as a fuel, it could just be a matter of time before algae's ship comes in.

Author's Note: 5 Ways to Use Algae for Fuel

Fuel from algae is an alluring concept and a difficult one. Difficult because many people absolutely hate the idea of using taxpayer money to develop it to its full potential. I see the technology as shaping up similarly to the model that built the Internet or the Global Positioning System network of satellites. Arguably, both involved high risk, unproven technology and little immediate, tangible benefit to the public in their early years of operation. They were also both heavily subsidized by the government.

Military leaders say their thirst for biofuels goes beyond any partisan or environmental agenda and is a matter of national security. If they get their way in buying biofuels such as ones based on algae, it won't be cheap to begin with. But if history is a guide, I think it will create markets that eventually bring down prices, and find a wide range of consumer applications.