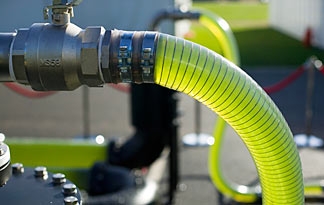 Could we turn algae into fuel? Check out these Alternative Fuel Vehicle Pictures to learn more.
DCI

If you've been to Texas and seen vast, empty fields dotted with heavy machinery, you probably know that a good deal of the country's fuel oil comes straight out of the ground, spouting through wells that drill and pump black gold from deep below the earth's surface. It's by no means cheap or easy to get all that crude oil to the surface, and because crude oil prices remain high, energy producers are increasingly turning other energy sources. In fact, one of the most attractive alternative fuel sources doesn't come from the ground at all. Instead you'll find it in open water -- and maybe even in your own fish tank.

Scientists use the term algae to refer to a large and varied group of plantlike organisms often found in water. Like plants, algae are photosynthetic: They convert carbon dioxide into food using the power of sunlight. However, algae do not have stems or roots.

To the rest of us, algae are best known as that slimy green stuff that grows on top of pond water and at the surface of dirty swimming pools. Algae are also the scourge of aquarium keepers far and wide, who wage a never-ending battle to minimize its spread throughout their tanks. In addition to ponds, lakes, pools and fish tanks, algae also grow in soil, snow and even clouds.

While they may be a gross annoyance to some, algae serve a number of important environmental functions. According to the Encyclopedia of Biological Invasions, algae produce more than 70 percent of the world's oxygen and consume large swaths of carbon dioxide.

Perhaps more important for a planet's population who are increasingly relying oil, algae can also be used to make a number of biofuels, including ethanol and biodiesel. Methods vary, but according to Esquire magazine, to make biodiesel from algae, an energy producer often begins by selecting the strain of algae it wants to use since some are more productive or efficient than others. Oilgae reports that energy companies have started to dabble with genetically engineering the most productive algae strains, a small amount of which is added to a water-filled tank along with fertilizing nutrients. The algae are then exposed to sunlight, which starts the photosynthesis process. The carbon dioxide is converted from the air into sugar and then the algae metabolize the sugar into oil, which takes about a week. By the end of this process, the algae will have created up to 60 percent of their weight in oil.

Next, the fuel maker must extract the oil. Pressing is a common extraction method. This accomplished by either using a machine to physically squeeze the oil out (think of olives being crushed and pressed to get their oil) or by using compressed carbon dioxide, which separates the oil through vaporization. The fuel maker then uses a catalyst -- sodium hydroxide and methanol, for example -- to remove oxygen from the oil, replacing it with hydrogen to create diesel biofuel.

Refiners can also convert algae oil into other forms of biofuel, including methane, gasoline and jet fuel. According to Smart Planet, jet fuel created from algae helped power a November 2011 United Airlines flight from Chicago to Houston, the first commercial domestic flight to use algae-based fuel. The airlines aren't the only ones going (slimy) green. Oilgae estimates that roughly 100 U.S. companies and an equal number of universities are currently exploring algae-based fuel production.

Are we ready to start filling our planes, trains and automobiles with pond scum propellant? Read on to find out.

Algae have long been considered a better alternative to oil than other natural fuel sources like soybeans, corn and wheat, primarily because algae are capable of producing a much larger yield (up to 100 times more oil per acre). While the use of these staples for fuel has had the unintended effect of driving up food prices by making the crops more scarce, algae can be harvested for oil in various bodies of water without taking up land that would otherwise be used for farming.

Even though decades ago researchers began looking at algae as a fuel source, algae oil was until recently considered too costly to produce on a scale large enough to put a dent in national petroleum consumption. In 1996, the U.S. Department of Energy (DOE) discontinued a program that for almost 20 years had focused on developing renewable transportation fuels from algae, finding -- as the National Renewable Energy Laboratory noted in a close-out report -- that "the high cost of algae production remains an obstacle." The DOE's most optimistic estimate set the price of a barrel of algae oil at twice that of a barrel of petroleum.

By 2008, however, crude oil costs had skyrocketed, making algae oil an attractive and not-so-costly alternative. The DOE revived the algae fuel program and has partnered with Chevron to continue research. The tables have turned to such an extent that a recent study by the DOE's Pacific Northwest National Laboratory indicates that if 5.5 percent of U.S. land area -- particularly in the Great Lakes, Southeastern seaboard and Gulf Coast -- were dedicated to algae growing, the country could use current production methods to replace as much as 17 percent of the oil that it currently imports for transportation purposes with algae oil.

As research continues, the cost of making fuel from algae is expected to drop. Researchers are working on more efficient ways both to grow algae and to extract its oil. Biodeisel is currently the most cost-effective fuel use for algae oil because the process requires less energy than converting the oil to methane, ethanol and other types of fuel. The goal is to make algae oil an economically viable alternative to petroleum in the event that crude oil prices drop.

It's not yet time to replace all the oil wells in America with algae-growing ponds, but the days of swapping black gold for green sludge aren't far off.

Save the Planet with the Slimy Green Stuff

When it comes to algae, addiction is good. The plantlike organisms just can't get enough carbon dioxide. According to Scientific American, algae fuel producer Sapphire Energy estimates that the algae it uses takes in about 14 kilograms of greenhouse gas for every gallon of oil produced. While the process itself still burns carbon in transporting and using the fuel produced, the algae oil production process is considered much more energy-efficient than traditional oil production. Algae's environmental benefits aren't limited to clean air. The organisms have also been shown to treat wastewater by removing toxins.