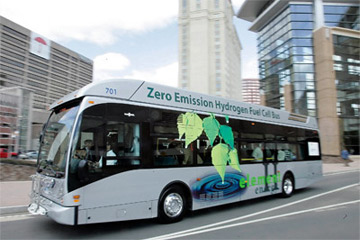 Back in the 1980s, Michael Knight was one of the only folks cruising around in a hydrogen-powered car (and that was on TV). Decades later, this fuel cell bus gets ready to head out for a demonstration ride like it's no big thing. Want to learn more? Check out these alternative fuel vehicle pictures!
AP Photo/Bob Child

Long before David Hasselhoff rippled his pecs on the beaches of "Baywatch," he starred in a TV show called "Knight Rider," an action hit featuring a supercar named KITT. The flashy auto was so cool and so powerful (What self-respecting teenage male didn't want to sit behind the wheel?) that our curly-haired hero easily chased bad guys all over town at an astounding 300 miles (483 kilometers) per hour. Dang, the car even talked like a caring grandfather.

What gave KITT its awesome power? The car came equipped with a hydrogen-powered engine that allowed Michael Knight (Hasselhoff) to bedevil the most dastardly TV villains of the early '80s.

More than a decade after the original series crashed and burned in the ratings, politicians, journalists and others began touting hydrogen as the energy of the future, an alternative to fossil fuels such as coal. They said hydrogen was the magic elixir that would fuel all our transportation and electrical needs. After all, hydrogen was abundant and burned clean, which would theoretically help cut down on greenhouse gas emissions. In fact, in 2003, none other than U.S. President George W. Bush, who made his fortune in the oil business, announced he was earmarking $1.2 billion in an attempt to make hydrogen the fuel of choice for Americans [source: CNN].

Who could blame him? Hydrogen is a wonderful source of fuel. Heck, it powers the sun. Not only that, we can never run out of hydrogen. It's in our air and in our water. Hydrogen is the most plentiful element in the universe (although not on Earth).

But before you invest in a hydrogen-powered vehicle, think about this: Rust never sleeps, and neither does hydrogen. The element makes metal brittle, reduces its strength, and can weaken a car like a termite through wood [source: Science Daily]. Yep, not good.

Let's travel back in time to the year 1520. In Switzerland, an alchemist named Philippus Aureolus Paracelsus has put a piece of iron in a solution of sulfuric acid. The acid begins to bubble in "an air which bursts forth like the wind." Although Paracelsus didn't know it then, that bubble-making wind turned out to be hydrogen. The No. 1 element was officially named in the late 18th century by Antoine-Laurent Lavoisier, a French aristocrat who dabbled in science and eventually lost his head during the French Revolution [sources: ASME, Chemical Heritage].

Scientists and inventors soon found that Lavoisier's hydrogen was the lightest element in the universe. While that might prove wonderful for filling up balloons, it wasn't so awesome when it came to interactions between hydrogen and metal. In fact, hydrogen atoms have the uncanny ability to seep through various metals, turning them brittle, eventually cracking, rupturing and breaking them [source: Science Daily].

Although scientists have been studying the phenomena since 1875, they don't understand fully the physics of the problem. What they do know is that hydrogen atoms easily diffuse, or spread, through metals, especially at high temperatures. The atoms recombine with one another to form hydrogen molecules. These molecules find a home in the microscopic nooks and crannies of the metal, creating a huge amount of pressure. That pressure reduces the metal's tensile strength. Crack! The metal breaks [source: McGill University].

Researchers can't predict where hydrogen embrittlement will occur. All they know is that the tiny hydrogen atom loves to permeate and gobble up most high-strength alloys, including steel and those that are nickel-based. They can even watch it happen during computer simulations [source: McGill University]. The severity of embrittlement varies with the type of alloy and with temperature [source: Gray].

Hydrogen embrittlement has become the bane of such things as aircraft carriers, battleships, airplanes, spaceships and nuclear reactors. Occasionally, the consequences have been deadly. In 1985, a soldier died in Great Britain when the bolts on an American-made 155 mm howitzer self-propelled gun failed. The bolts were holding down the manifold that raised and lowered the gun. The bolts snapped, pinning the soldier under the manifold. Investigators blamed hydrogen embrittlement. The gas made the bolts so fragile that they couldn't withstand the heavy jolts produced by the firing gun. In 1984, the bolts (also for the gun mounts) on an M1 Abrams tank snapped, too [source: Anderson].

Hydrogen Embrittlement: Breaking Up Isn't That Hard to Do

Scientists are feverishly working trying to predict how, when and where hydrogen embrittlement will take place. The auto industry, among others, is concerned about it. As you probably know, hydrogen-powered vehicles get their energy from a device called a fuel cell. Fuel cells allow hydrogen to combine with oxygen to produce heat and electricity. The only byproducts are heat and water [source: National Renewable Energy Laboratory].

Hydrogen atoms can bore into metal during the manufacturing process, such as when workers chromium-plate car parts, weld parts together, or when metal is milled or pressed. Hydrogen infiltration can also occur when the car is being driven on the road. The atoms saturate metal, seeping into fuel tanks and other components. As a result, car parts such as fuel tanks, fuel cells and ball bearings can fail without warning. The result? Costly repair bills -- and worse [source: Science Daily].

Don't junk the hydrogen car idea just yet. Researchers in Germany have been studying how hydrogen atoms move through metal. By tracing the route of the atoms, they hope to develop embrittlement-resistant materials that can be used in hydrogen cars. Scientists are also researching ways to stop the embrittlement process by constantly heating the hydrogen atoms that are always on the move [source: Science Daily].

By better understanding how hydrogen atoms go about their destructive business, scientists and engineers are confident they will be able to make onboard fuel tanks and other parts that don't degrade over time [source: Azom.com]. Before you know it, we'll all be driving hydrogen cars.

Until I started researching this article, I had no idea that hydrogen, the most abundant element in the universe, was so destructive. Oh sure, I knew the basics of why my beloved 1993 Ford Ranger began to rust — oxygen combined with iron to form iron oxide, and before I knew it, I was scraping and priming and painting. I guess I shouldn't have been surprised to know that hydrogen eats away at metal just as easily. Hydrogen embrittlement is a serious matter, especially when hydrogen is a key component in solving our fuel needs and helping the planet. Hopefully, scientists will be able to figure out a cost-effective solution to the problem.