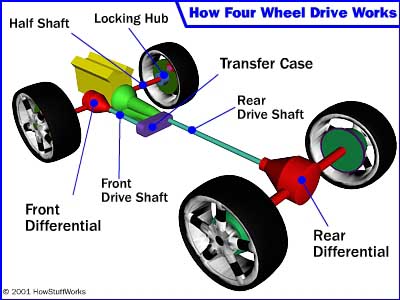 The type of part-time system typically found on four-wheel-drive pickups and older SUVs works like this: The vehicle is usually rear-wheel drive. The transmission hooks up directly to a transfer case. From there, one driveshaft turns the front axle, and another turns the rear axle.

When four-wheel drive is engaged, the transfer case locks the front driveshaft to the rear driveshaft, so each axle receives half of the torque coming from the engine. At the same time, the front hubs lock.

The front and rear axles each have an open differential. Although this system provides much better traction than a two-wheel-drive vehicle, it has two main drawbacks. We've already discussed one of them: It cannot be used on-road because of the locked transfer case.

The second problem comes from the type of differentials used: An open differential splits the torque evenly between each of the two wheels it is connected to (see How Differentials Work for more details). If one of those two wheels comes off the ground, or is on a very slippery surface, the torque applied to that wheel drops to zero. Because the torque is split evenly, this means that the other wheel also receives zero torque. So even if the other wheel has plenty of traction, no torque is transferred to it. The animation below shows how a system like this reacts under various conditions.

Animation of a basic system encountering various combinations of terrain. This vehicle gets stuck when two of its wheels are on the ice.

Previously, we said that the best four-wheel-drive system will send exactly the right amount of torque to each wheel, the right amount being the maximum torque that won't cause that tire to slip. This system rates fairly poorly by that criterion. It sends to both wheels the amount of torque that won't cause the tire with the least traction to slip.

There are some ways to make improvements to a system like this. Replacing the open differential with a limited-slip rear differential is one of the most common ones -- this makes sure that both rear wheels are able to apply some torque no matter what. Another option is a locking differential, which locks the rear wheels together to ensure that each one has access to all of the torque coming into the axle, even if one wheel is off the ground -- this improves performance in off-road conditions.

In the next section, we'll take a look at what could be the ultimate four-wheel-drive system: the one on the Hummer.