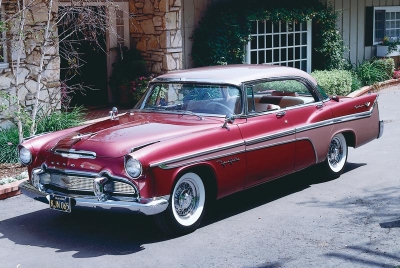 The 1956 DeSoto Fireflite came in many styles, including seating for up to nine.

DeSoto shared in the industry's general 1956 retreat, building about 4300 fewer cars. However, it returned to 11th place due to fast-fading sales at Nash and Hudson, Studebaker and Packard. The division finished in that spot again for '57 even though volume jumped to about 110,500 -- as near as DeSoto ever came to passing Chrysler (ending about 7200 units behind).

No wonder. The '57s were not only all-new for the second time in three years, but superbly engineered and strikingly styled. A low-cost Firesweep series based on the 122-inch Dodge platform joined the line in an effort to extend DeSoto's market territory. It helped.

The Firesweep sedan sold for only $2777, where the cheapest Firedome was $2958. Firesweeps also included two-and four-door hardtops and six-seat Shopper and nine-passenger Explorer four-door wagons. Fireflite offered all these plus a convertible; Firedome was the same but had no wagons.

All were big, heavy, powerful cars. The two upper series used the 341 V-8 from the '56 Adventurer with 270 and 295 horsepower, respectively. Firesweeps had the previous year's 330 debored to 325 cid and tuned for 245 horsepower standard, 260 horsepower optional. Last but not least, a soft-top Adventurer joined the hardtop coupe in a separate series above Fireflite. They packed 345 bhp from a modestly bored 345 Hemi.

DeSoto also benefited from Chrysler's corporatewide switch to torsion-bar front suspension, which made these heavyweights uncannily good handlers. Aiding performance was the arrival of quick, responsive three-speed TorqueFlite automatic as an optional alternative to PowerFlite. Also controlled by Highland Park's pushbuttons, it was a great transmission that would way outlive DeSoto.

Indeed, for all this excitement, DeSoto was now threatened again, only this time by an upwardly mobile Dodge and a downward expansion of the Chrysler line. As if on cue, production plunged to 50,000 units the following year -- the make's lowest total since 1938. A sharp national recession, poor workmanship after '56, and several marketing mistakes all contributed to a downward spiral from which DeSoto would never recover.

Predictably, the '58 DeSotos were much like the '57s save busier grilles and trim, and standard quad headlights. (Some states hadn't approved "quadrilights" for '57, so DeSoto front fenders were designed to accept one or two lamps each, the latter where law permitted. By '58, four-lamp systems were legal nationwide.)

The '58 lineup returned along with a new Firesweep convertible. At $4369, the '58 Adventurer ragtop was the most-expensive DeSoto ever, though Chrysler's convertible 300D cost nearly $1300 more.

Engines and power ratings swelled, but the complex Hemi was ever costly to build, so Chrysler began switching to cheaper wedgehead V-8s for '58. Among them were two new "Turboflash" DeSoto engines.

Firesweeps had a 350-inch mill with 280 horsepower standard or 295 with optional four-barrel carb. Other models carried a big-bore 361 with 295 bhp in standard Firedome tune, 305 with twin four-barrels in Fireflites (optional on Firedomes), 345 in high-compression Adventurer guise, and a smashing 355 for Adventurers with optional Bendix fuel injection.

Injection cost a hefty $637.20 and few were ordered. Fraught with problems, all were probably replaced with carburetors. With all this, the '58 DeSotos were quite quick even without the Hemi, helped by fast-shifting TorqueFlite, now standard on Fireflites and Adventurers. (Firesweeps again came with three-speed manual and offered Firedome's standard PowerFlite at extra cost.) A 305-horsepower Firedome could scale 0-60 in 7.7 seconds, 0-80 mph in 13.5 seconds, and reach 115 mph.

DeSoto claimed its towering tailfins of this era "added stability at speed," but that was pure propaganda. The fins did little from an aerodynamic standpoint under 80 mph. Their main purpose was to make Chrysler products stand out from the crowd -- which they most definitely did.