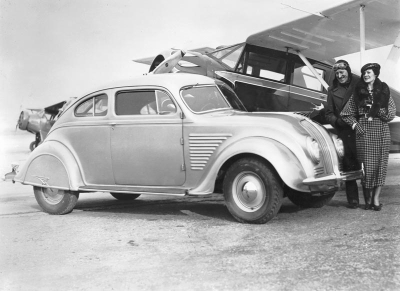 The 1934 DeSoto Airflow, such as this five-passenger coupe model, served as the base for all DeSoto cars throughout the early 1930s.

Prosperity seemed endless in 1928 when the fast-rising new Chrysler Corporation purchased Dodge and issued its first DeSoto and Plymouth. Though good times soon turned to "hard times," DeSoto would be one of the few pre-Depression "expansion" makes to survive them.

DeSoto went on to build its most-exciting cars in the '50s, only to die in late 1960 after a flash recession and sibling rivalry obliterated its narrow, well-defined price niche. In between, DeSoto did good and sometimes great business as the medium-price "bridge" between Dodge and Chrysler, with design and engineering that usually owed more to the latter than the former.

Early DeSotos, though, were pitched just above Plymouth in size, power, and price. The make didn't settle into its long familiar "middle-middle" role until the late '30s. Even so, DeSoto history generally parallels Chrysler's with one key exception: While Chrysler offered a group of conventionally styled Sixes for 1934, DeSoto relied exclusively on that year's radical new Airflow. The result was a sales disaster that briefly threatened DeSoto's existence.

The 1930-33 DeSotos reflected general Chrysler Corporation trends. Styling was bolt-upright formal through '31, then smoothed a bit with barrel-like grilles. Sixes and eights were available through 1931. All were orthodox side-valve designs with cast-iron construction. The five-main-bearing eight was smoother and quieter than the four-main six, but neither was a powerhouse.

Eights cost around $1000, early-'30s Sixes around $800-$850. But Eights appealed to only about one in three buyers, so DeSoto offered nothing but sixes from 1932 until its hemi-head "FireDome" V-8 of 1952. Actually, the six was but a single engine that was periodically enlarged -- essentially a smaller version of Chrysler's six.

Though never exciting, DeSoto's six was sturdy and reliable, happily running for long spells with little maintenance other than an occasional quart of oil. It was also fairly thrifty, returning up to 22 mpg with gentle use. These traits made later six-cylinder DeSotos quite popular as taxicabs.

DeSoto first observed a model year with the January 1932 introduction of its SC-Series "All New Six." This wore chunky but attractive styling as a standard sedan, seven-passenger sedan, and Custom sedan, convertible, and phaeton. Additional coupes and a new brougham two-door sedan arrived for '33.

All the pros and cons of the 1934 Chrysler Airflow naturally held for the DeSoto versions, only they came in a single four-model series versus a multiplicity of Chryslers. Output now bottomed out to a prewar low of just under 14,000.

Sedans were sold with either outside spare tire or "trunkback" styling that enclosed the spare in an integral luggage compartment. There was also a $35 two-tone paint option. Thanks to the Airstreams, production rebounded to 26,800, yet DeSoto dropped to 13th in the wake of Packard's highly successful new medium-priced One Twenty.

DeSoto Division rode out the last half of the '30s with increasingly larger and duller cars. Airflows disappeared after 1936, a year ahead of Chrysler's, but long sedans and limousines arrived that year on a 130-inch wheelbase; this grew to 136 inches for 1938.

The great Ray Dietrich of coachbuilding fame was hired to direct Chrysler's corporate design in this period, so DeSoto looked as conservative as its sister makes, though in tune with contemporary tastes. A national recession limited 1938 output to just under 39,000, but DeSoto still finished 12th. The industry recovered in 1939, but fared much better than DeSoto, which again ran 13th despite higher volume of over 54,000.

The DeSoto lineup assumed a consistent pattern by 1938: DeLuxe and Custom models selling at around $900 and $1000, respectively. Both rode the same orthodox chassis with standard 119-inch wheelbase. Open styles were conspicuously absent for 1939, though a sliding sunroof was offered on selected closed models.

Styling still left something to be desired. A '39 DeSoto looked like a Plymouth with goiter. Dumpy appearance would remain one of the make's sales handicaps until well after World War II.