Browse the article How CARFAX Works 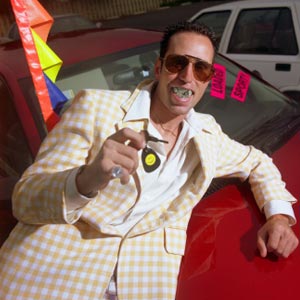 Despite the old cliché of the shady used-car salesman spinning yarns on a weedy, potholed lemon lot, many used-car dealers are honest, hard-working people trying to make a buck selling low and buying lower. But reputations are hard to shake, and since most people have at most a basic understanding of vehicular mechanics, the opportunity exists to sell used vehicles that appear sound but in truth have serious problems -- even die-a-mile-down-the-road problems.

And if you think private sellers have a sterling track record, think again. Transactions between private citizens don't always include the full and free exchange of information regarding the vehicle at hand. Often, the buyer and seller connect through a newspaper or online advertisement and never see each other again.

These sellers and their used cars aren't always quite what they seem. Sometimes, cars with "for sale" signs parked in grocery store parking lots give the impression that they're being advertised by a private seller, when in fact the seller has many such auction-bought clunkers strewn about the public parking lots of an entire city.

There are quite a few potential deal-breakers when it comes to the purchase of a used car. If the car has been in a series of wrecks or has been totaled out by an insurance company, the chances are pretty good it will have significant problems. Some cars have recalls, or have been categorized by state motor vehicle agencies as "lemons."

Cars or trucks originating from coastal areas may have rust in hard-to-see spots, while vehicles that have been in major floods -- think "Katrina cars" -- may seem to run normally, only to leave you high and dry long after you and the seller have exchanged titles and cash and parted ways.

Pulling the wool over one's eyes about the murky origins of a car became considerably more difficult with the rise of CARFAX, a vehicle history-reporting company that is used in millions of car transactions each year.

Used-car buyers can now access records related to any given car in a matter of seconds through CARFAX, allowing a consumer in need of new (old) wheels to make a much more informed decision, while empowering used-car salesmen to back up their claims with a clean CARFAX report.

Next, we'll run a background check on CARFAX.

There are many ways to pass off a dud car onto an unsuspecting buyer, and monkeying around with the odometer is one of them. By removing the odometer's casing and physically rolling back numbered wheels, a car can appear to have plenty of good miles left in it, instead of plenty of hard miles hanging on it.

One Missouri-based computer analyst believed odometer fraud could be reduced or eradicated by collecting mileage readings from state inspection records, and that he could make a living doing so.

In 1984, Edwin Barnett III started CARFAX and soon began selling reports based on 10,000 vehicle records he obtained. In order to grow, Barnett knew his company would have to have far greater access to vehicle records. In nine years' time, CARFAX was receiving automobile records from all 50 states. By the time the company was 10 years old, CARFAX was maintaining a database with more than 100 million records. That's pretty impressive, but 10 years after that, CARFAX was maintaining around 3 billion records.

Though CARFAX is now headquartered in northern Virginia, its original headquarters in Columbia, Mo., is now home to the expansive and ever-growing CARFAX data center that today keeps up with an astounding 6 billion records.

The U.S. government seems to recognize the value of CARFAX. During the "cash for clunkers" program of 2009 (officially known as the car allowance rebates system, or CARS), the National Highway Traffic Safety Administration provided CARFAX (and Experian Automotive) vehicle identification numbers (VIN) of the 700,000 clunkers that consumers turned in at dealerships. By law, these cars must have their engines taken out and destroyed, and the rest of the metal scrapped. The government's partnership with vehicle history-reporting companies guaranteed that records would be available to the public so that no scrapped cars were re-diverted back to the public for sale.

Next, we'll take a crash course on the information found in CARFAX reports.

According to the Washingtonian, CARFAX is one of the best companies in America to work for. Employee happiness may be due to corporate policies like catering lunch at company-wide gatherings every Friday in a cafeteria that features a Wii station and a basketball court, providing health benefits to same-sex domestic partners, and chipping in on the cost of employees' gym memberships. 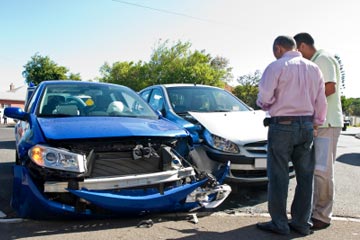 Damage to a vehicle isn't always this obvious.
©iStockphoto.com/RapidEye

CARFAX allows customers to search vehicle histories using each car's "fingerprint" -- the vehicle identification number (VIN) that is printed and stamped on various parts of your vehicle. It's also listed on a car's title, inspections records and insurance policies. Your vehicle's VIN has been with it since the beginning, and like your credit history, a look into its recorded past can reveal some dark episodes.

CARFAX reports include any available information relating to:

Where does all this information come from? All 50 state DMVs (and many in Canada, too) provide records to CARFAX. Information is also gathered from collision-repair centers, insurance companies, rental companies, fire departments, law enforcement agencies, dealerships, import/export companies, auction houses and state inspection stations.

When gaps have been found in the information provided in a vehicle history report, CARFAX has traditionally acted quickly to remedy the situation and provide more comprehensive and useful reports for consumers.

Following an investigation by CBS Atlanta into dealers who sold previously wrecked cars as clean even though mechanics working at auction houses -- where most used cars pass at some point -- had discovered wreck damage, CARFAX began partnering with auction houses to make sure that information was included on CARFAX reports.

Regardless of the history of any car, there's no way CARFAX can guarantee (or is responsible for doing so) that the records it provides are comprehensive and complete. CARFAX can only pass along information that has been provided to it -- if no record ever passes to CARFAX, it won't pass on to you.

When you're looking at vehicles to buy, the seller will often provide a CARFAX report free of charge. Reports may even be taped to the inside of a car window, or their availability may be touted ("Ask us for the CARFAX report!") on signs around the car lot and on the car itself.

Around 29,000 major and minor used-car dealers use CARFAX. If a salesperson at a lot is giving you the runaround about obtaining the history report, you may consider moving along until you find a dealer who freely offers the information. For higher-end used cars, many car manufacturers have Certified Pre-Owned programs that utilize CARFAX to guarantee the car has no wrecks or problems in its history.

Of course, you can obtain your own report from the CARFAX Web site on nearly any car or light truck under the sun -- post 1981, that is. Before then, VINs weren't in standard use.

You can purchase a single CARFAX report for $29.99, or get a bulk deal of 10 reports for $34.99 or unlimited reports for $39.99. Regardless of which package you select, you have 30 days to use the purchased service.

CARFAX isn't the only place you can turn for vehicle-history reports. Other services and government resources are available, such as Experian AutoCheck, the National Insurance Crime Bureau (NICB) and the National Motor Vehicle Title Information Systems database.

CARFAX doesn't recommend you trust a vehicle-history report for all of your car-buying needs. The company acknowledges possible lapses in records provided and advises you to thoroughly examine the car, test-drive it, have a mechanic look at it and educate yourself about the type of vehicle in question.

Obtaining your own CARFAX report may be a better option than receiving one. For one thing, it's not terribly difficult to fake a computer printout. Also, make sure the records match the car's VIN, and that the previous owner on the report is in fact who you're dealing with. There have been instances of sellers advertising VINs for different vehicles of the same year, make and model, but a careful physical comparison of the vehicle's stamped VIN and the VIN listed on the CARFAX report should ease your mind.