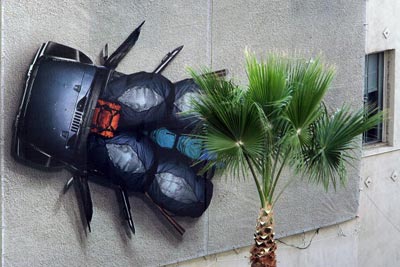 Image Gallery: Hybrid Cars This advertisement connects the car to nature, shaping it like a bug. Is this greenwashing? See pictures of hybrid cars.
David McNew/Getty Images

You've probably seen it lots of times on television -- a commercial shows a sleek, new car driving down windy, mountainside roads, and a narrator lists all the environmentally friendly aspects of the vehicle. The company will argue that it's the greenest car out there, and that they have the best ideas for a sustainable auto industry. You're distracted by all these promises of high gas mileage and comfortable interiors -- and look, it's affordable! Before you know it, the car has reached the top of the mountain, which is actually a bright, sunny field -- and look, even the surrounding wildlife likes it! This car is one with the Earth, in complete harmony with its environment.

Cars and light trucks in the United States alone cause about five percent of the world's total carbon emissions, one of the major causes of global warming and dramatic climate change. As awareness spreads and activist groups campaign against poor industry standards, car companies have taken notice. Many have taken steps to inform the public that they know what's going on -- you might notice a lot more TV commercials, Web sites and print ads dedicated to green aspects.

These ads might be slickly produced, with pleasant colors, soothing music and reassuring announcers, but are they the real deal? Some people have seen these commercials and compared them with a car's actual performances or a company's actual stance on issues, and the two don't always add up. Are car companies greenwashing the public just to cash in on a recent trend? Do they commit any of the six sins of greenwashing?

As people become more aware of greenwashing tactics, a list of six sins advertisers commit has surfaced. They include hidden tradeoff, lack of proof, vague claims, irrelevant claims, the lesser of two evils and outright lies. Do auto companies commit any of these sins?

Hidden tradeoffs - While one positive aspect of a car's performance might be the highlight in a commercial, companies sometime fail to mention negative factors. Early ads for the Reva G-Wiz, for example, usually avoided the fact that the vehicle is technically a "quadricycle," not a car. The vehicle didn't have to pass any crash tests. When UK magazine Top Gear decided to put on their own crash tests, the results were damaging.

Lack of proof - Some companies make claims they can't easily back up with data. In January 2008, the grassroots environmental network Friends of the Earth Europe called on Swedish car manufacturer Saab to change its advertising significantly or face legal action. The network argued that Saab was making false claims when the company said its "Biopower" engines reduce CO2 emissions by as much as 80 percent. Saab also didn't list any figures on CO2 emissions or fuel consumption on its Web site or brochures, which is against the law in Europe.

Vague claims - This type of greenwashing happens when an ad mentions something that's too broad or confusing for consumers to understand. Several car companies will give a high but misleading mile per gallon number, for instance -- mechanical rolling road tests usually give better results than real driving conditions (like hills and stop-and-go traffic). For example, consumers who bought a Ford Focus, the best-selling car in the United Kingdom, believed their cars would get around 55 miles per gallon on the open road. After Auto Express magazine did their own tests, that number turned out to be 23.3 percent lower at 42.5 miles per gallon [source: The Guardian].

The lesser of two evils - Some car commercials get called out for claiming the car has low emissions, when a footnote explains that the car has the lowest emissions in its class. It might still have high emissions compared to other vehicles, especially if its class is a particularly big polluter [source: Climate Change Corp].

So do all automakers greenwash? While it's safe to say there are some companies who make an effort to innovate -- see the Aptera Hybrid Car for such an example -- some statistics show a disingenuous attitude toward green policy. Recent surveys suggest that companies are riding the green wave to protect their reputation, not out of actual concern. In a UK survey, 27 percent of respondents admitted their eco-friendly policies were meant to make them look good in the eyes of consumers -- consumer pressure received 20 percent of the vote, and good business sense got 18 percent. Only one percent of respondents said green choices were made out of concern [source: Financial Times].

For lots more information on cars, alternative fuel and marketing, see the next page.

One of the biggest examples of greenwashing in recent memory is the advertising from automakers Toyota. The company is behind the Prius, a popular hybrid vehicle that will reportedly get over 50 miles per gallon in its 2009 model. But while Toyota pushes ahead with hybrid technology -- the tagline on its Web site is "Moving Forward" -- the company is also a member of the Alliance of Automobile Manufacturers, a Washington, D.C., lobbying group that opposes better fuel standards. It was only after Toyota received thousands of angry e-mails from customers that they changed their stance on fuel economy [source: NRDC].