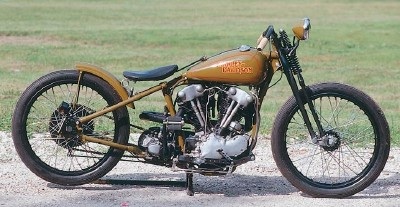 The Board Track Replica has a 1931 Harley frame.

Gene Williams doesn't work out of a large production facility, nor does he have the latest machinery on hand when it comes to building things like the Board Track Replica. What he does have is an intimate knowledge of motorcycles and the know-how to assemble his own creations.

Board-track racing (so named because the oval tracks were made of wooden planks) was popular in the early days of motorcycling as a test of both speed and endurance. To build this replica of a 1930s board-track racer, Williams started with a Harley-Davidson Knucklehead engine that he bored out and fitted with a high-performance cam and dual carburetors. A 1931 Harley VL model donated its frame, which had to be stretched by an inch to fit the larger engine. (The VL came with a flathead V-twin, which is more compact-but far less powerful-than the overhead-valve Knucklehead.)

The fuel tank has been modified to carry gas only in the left half; the right half is just a cover that conceals the oil tank, battery, and ignition coil. Olive Drab paint that mimics the color used on Harleys from the late teens to the early 1930s gives the bike a period appearance-which is the whole idea.

Go to the next page for more photos and details of this Harley-Davidson-powered chopper, the Board Track Replica.For more information on custom choppers and motorcycles, see: 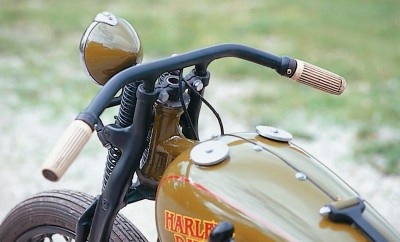 What is the world's fastest motorcycle?
10 Vintage Motorcycle Brands
Can motorcycle jackets save your life?