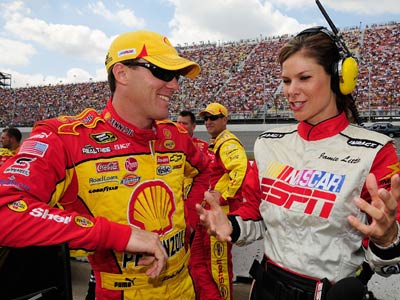 Kevin Harvick, driver of the #29 Pennzoil Chevrolet, speaks with ESPN television personality Jamie Little prior to the start of the NASCAR Sprint Cup Series 3M Performance 400 at Michigan International Speedway on Aug. 17, 2008 in Brooklyn, Mich.
Rusty Jarrett/­Getty Images for NASCAR

­The engines are roaring, viewers are digging into plates of hot wings and the pace car is leading 43 super-charged stock cars around the track. The green flag waves and the race -- and the broadcast -- is on.

Although the prerace show is often broadcast from a mobile studio, the commentary for the race itself is provided from a press box high above the action. In the booth will be a number of people -- usually around four -- who will recap, analyze, describe and otherwise inject excitement into every lap of the race.

One of the commentators will provide lap-by-lap coverage of the action as it occurs on the track. This is more of a nuts-and-bolts description of what's happening in real-time -- who's ahead, who's passing whom, which car is flaming out and pulling into the pit. Each network has their own team of commentators, but lap-by-lap commentary has been provided by Bill Weber on TNT, Dr. Jerry Punch on ESPN and Mike Joy on FOX.

The lap-by-lap commentator is joined by several analysts, also known as color analysts because they try to add flair to the proceedings. Many of them, such as ESPN's Dale Jarrett, are themselves former drivers, giving viewers and listeners of the broadcast insider's knowledge and added perspective to the race. Analysts tell racing anecdotes, share interesting statistics and often have signature phrases, such as "Boogity, boogity, boogity!" which is shouted by FOX analyst Darrell Waltrip (another former driver) at the beginning of races.

There is another team of reporters and camera operators down in the pit. These pit reporters (usually around four) offer insights into what's happening at eye level, what different pit crews are doing, and what information about mechanical developments the team members are relaying. If a problem with a car is discovered during a pit stop, the pit reporter will be the first to give the details. They also interview team members and engage in back-and-forth audio conversations with the crew in the broadcast booth.

At the end of the race, a pit reporter or analyst on the ground will interview the winner and several runners-up. Cameras will capture the celebration on the field as the driver, team owner and team members all savor the victory. If it's an especially important race, or the end of the season, the network may have more pretaped segments ready to highlight the winner's achievement or to take a look back on the ups-and-downs of the season. Finally, the broadcast will either continue showing visuals of the field with audio from the broadcast booth, or it may switch back to the mobile studio, where analysts will dissect the race, summarize the preceding events and chew on some final stats. Upcoming races will be promoted, and viewers may get one last look at the leader board and season standings before final credits roll.

­In addition to the lap-by-lap reporting, color analysis and scoops from the pit reporters, NASCAR broadcasts feature a slew of high-tech features that will blow your wheels off, or maybe just annoy you. We'll take a look at some of them on the next page.