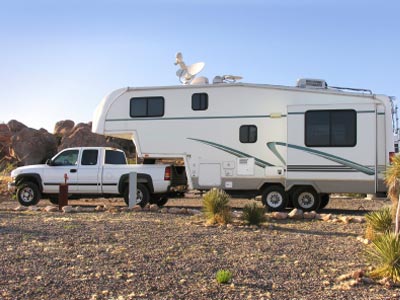 If the fifth wheel hitch is properly installed in the bed of the pickup, the weight of the trailer will press down between the cab of the truck and the rear axle.
Jill Fromer/iStockphoto

It's probably not a stretch to suggest that everyone is familiar with the standard semi trailer design. Not only do they tower over nearly every other vehicle on the highway, but they're often the longest vehicles on the road. Big rigs are capable of towing trailers that carry literally tons of cargo weight. But how do they do it?

Sure, semi trucks have gigantic diesel engines, and those have a lot to do with moving that much weight. But how can the vehicle support and hang onto that much trailer weight in the first place? A relatively puny ball hitch -- the type you'd find below the back bumper on any pickup truck, SUV or recreational vehicle -- would snap off under that much weight. So what's the secret?

There's no real secret, except that semi trucks don't use ball hitches. They rely on a heavy-duty trailer attachment system, one that closely resembles towing equipment you can add to your own heavy-duty pickup truck -- a fifth wheel trailer hitch. Fifth wheel hitches are designed for carrying much heavier loads than the typical ball hitch can handle. The front edge of the trailer extends over the rear bumper of the pickup truck. The attachment point is in the bed of the truck, not at the rear bumper. When properly installed, the weight of the trailer is actually pressing down between the cab of the pickup and the rear axle. This allows the truck to carry a significantly greater amount of weight -- a much larger trailer, in other words.

­As far as towing equipment pricing goes, fifth wheel hitches run the gamut. They seem to start around $500 for an "economy" fifth wheel hitch and go beyond $3,000 for a top-of-the-line model. As a general rule of thumb, as the gross trailer weight rating of the hitch increases, so does the price. Of course, the high-end hitches also feature various design attributes that make them valuable to someone pulling a heavy trailer. Sliding hitches, better bearings and heavier attachment hardware are just a few examples of features that can drive the price of a hitch upward.

Let's just say that you've decided to install a fifth wheel hitch in the bed of your heavy-duty pickup truck. Will you need to have someone install it, or is it something that you can easily handle on your own? Read the next page and decide for yourself.