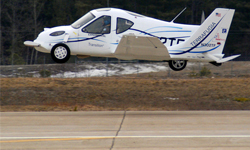 One pretty obvious dilemma of driving down the highway in a craft that needs to take to the air is, "What do you do with the wings?"

If you're the maker of the Terrafugia Transition, the answer is, "You fold them." The Transition, a four-wheel, canard-bearing vehicle, features wings that fold twice -- once at the root, where the wings meet the fuselage, and again mid-wing. Its engine runs on unleaded pump gasoline and switches power from the wheels to the rear prop when it's time to take to the sky.

Terrafugia calls it a "roadable aircraft," noting that you do need a Federal Aviation Administration (FAA) sport license (or higher) to fly it. But a driver's license will suffice just for driving to and from the airport. By the way, if you're thinking of making dramatic "Back to the Future" style take-offs and landings to the amazement of land-bound motorists -- forget about it. Legally, you can only take off and land from an airport or private airstrip.

The makers of the Transition, many of them graduates of the Massachusetts Institute of Technology, acknowledge the dangers, failures and frustrations that have plagued past inventors of roadworthy airplanes. The company even poses the question on its Web site, "Why will the Transition be any different?" The answer: "The Transition has the advantage of modern engines, composite materials, and computer-based avionics. Even more important is the approach being taken by Terrafugia to design a vehicle for pilots that brings additional ground capability to an airplane instead of attempting to make a car fly."

The Transition has driven and flown successfully in a number of tests. As of early 2010, Terrafugia estimated it would make its first customer delivery of a working, flying Transition in 2011.

In the event of an air emergency, you might strap on a parachute -- if you were fortunate to have one on-board. To find out about the flying car that uses a parachute, read the next page.