Slide open the door -- any door -- of the 1988 Renault Megane concept car and you were bound to feel you were about to step into someone's small but elegantly appointed living room.

First of all, those wide doors slid all the way apart, crossing right in front of the fenders. As the doors separated, they reveal a pillarless entryway with four armchair-like seats beckoning you into the 1988 Renault Megane concept car.

May as well sit down. After all, as soon as the remote control requested the doors to open, the seat swiveled to the side in greeting. To refuse this invitation seemed almost impolite.

How about trying out the back compartment? Plenty of space in there -- but if it still wasn't enough, you could just ask the driver to touch the right button. Then watch as the frameless back window moved itself rearward more than a foot on concealed rails, transforming the basic notchback sedan into an even roomier hatchback with an all-new silhouette.

If you suddenly felt the urge to nap after sinking deeply into that plush seat, the back tilted down and, for your weary feet, recliners extended outward. After a relaxing nap, maybe you were ready to peek inside the refrigerated mini-bar, tucked conveniently into the rear center console.

If you were in the mood for quiet conversation, the front passenger could swivel that seat all the way around, to face rearward. Easy enough; the seatbelt traveled right along with it.

Meanwhile, the driver of this Renault Megane concept car was enjoying his or her own brand of comfort and convenience. Of course, the engine wouldn't even start until the remote-control unit had been plugged into the slot to the left of the dash.

The swiveling seats helped the interior of the Megane resemble that of a private airplane more than a road vehicle.
©2007 Publications International, Ltd.

Mounted in the front console was an Atlas touch-screen, which took the place of many ordinary buttons and switches. Developed over a five-year period by Renault and TDF (Television Diffusion de France, a French television-broadcasting company), it offered navigational assistance as well as status checks.

Not bad for a Renault. But there were more delights on the way for the concept car enthusiast -- learn about them on the next page. 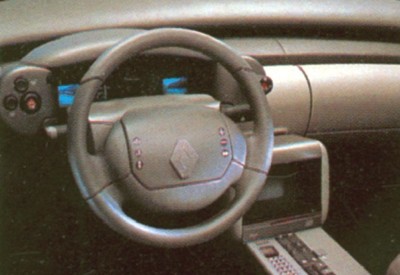 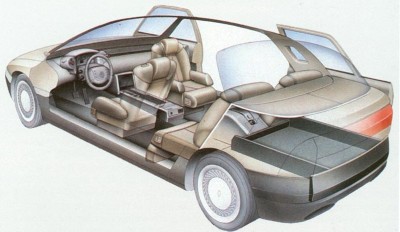 The 1988 Renault Megane concept car development didn't have to take into account American tastes. The French automotive giant was almost unknown in the United States.

After Chrysler took over American Motors in 1987 and abandoned the Renault-styled (but Wisconsin-built) Alliance and Encore, Renault virtually disappeared from the American motoring mind.

Not only had profits hit record levels in the wake of financial weakness during the mid 1980s, but the revived company, which is owned by the French government, was eager to flex its motorcar muscle and show what it could do in futuristic style and technology.

The 1988 Renault Megane concept car development was meant to demonstrate that Renault meant "business in the difficult upper end of the market." Rather than turn to a super sports car concept on the order of Ferrari's F40, the company chose instead to create a shape never seen before, "plump yet not appearing so, a completely new form."

In addition to aesthetic appeal, the Renault Megane concept car's unique aerodynamic shape sliced neatly through the air, with a drag coefficient as low as 0.21. That was close to aircraft levels.

Renault described its first real concept car as "a supercar for living." Most amazing of all, the Mégane went from idea to drivable concept in just eight months. Patrick le Quement, formerly with Ford and Volkswagen before becoming design director for Renault, told Automobile magazine that he had three priorities in mind: an "attractive shape, a convincing concept, and...driving pleasure."

Not many people would have an opportunity to experience the latter, but on the first two counts, at the very least, Renault had hit a bull's-eye. 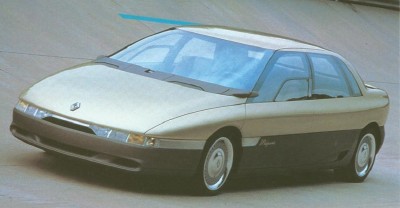 Though Renault had become an afterthought in the minds of American consumers, the company was still at the forefront of the European automotive industry. A look at the 1988 Renault Megane concept car specifications that follow indicate why.