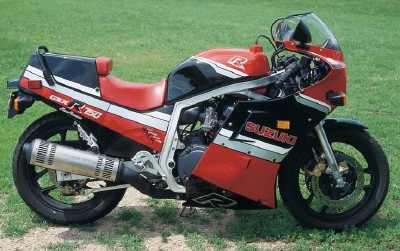 The 1986 Suzuki GSXR750 motorcycle came along at a time when the sportbike battle was growing ever-more intense. The machines themselves were getting closer and closer to street-legal racers.

Introduced for 1985, this latest entry from Suzuki was intended to reflect the technology learned from winning the World Endurance Championship in 1983 with a factory-prepared GSXR. Differences between the two were minimal.

The GSXR's four-cylinder engine represented the third step in a technological progression.

Wrapped around the engine was a box-section alloy frame that weighed significantly less than the former tubular steel one while being stiffer to boot.

In all, the GSXR750 represented a quantum leap forward for Suzuki, if not the entire industry. And better still was yet to come.

Go to the next page to see more 1986 Suzuki GSXR750 motorcycle pictures. 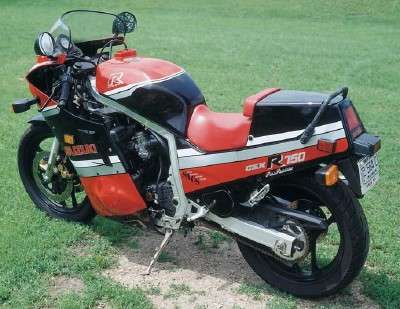 The plastic cover behind the driver's seat could be removed to unveil a skimpy passenger's perch.

The 1986 Suzuki GSXR750 motorcycle was designed with a race-like riding position. The air-oil-cooled engine was completely hidden by the fairing, but its presence could be verified by the dominant tachometer; it redlined at 11,000 rpm.

The 1986 Suzuki GSXR750 could reach speeds up to 160 miles per hour. On the street.
Trend-setting dual round headlamps were set into a full fairing.
At the rear, a tapered, squared-off tail section held a rectangular tailight.