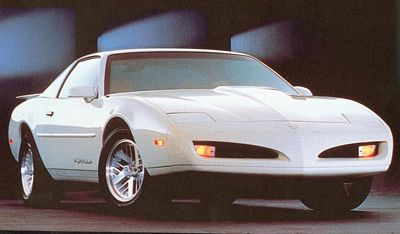 "Now the Excitement Begins." So went Pontiac's boisterous boast in its advertisements for the stunning, neatly downsized 1982 Pontiac Firebird, representing a platform that endured until 1992.

Fortunately for General Motors, the new-and-different Camaro and Firebird for the Eighties emerged just as America was sensing sparks of renewed interest in performance cars. A coincidence? Perhaps; but even in the darkest days of the '70s, when performance seemed a relic of the distant past, Pontiac had kept up the fight. Now that battle had an opportunity to turn into victory.

Once again, Firebird adopted a more rounded profile than Camaro, exemplified by the soft S-curves over each fender. Pontiac called attention to its "sabre-like nose and rakish tail."

Some models wore full-width, smoked-lens taillamps, creating a blackout effect. All were "glassback" coupes, with a rear hatch instead of a trunk lid. Several automakers had revived convertibles in the works, but there would be no open

Firebird until the end of this third generation.

Front-wheel drive had been considered, but the ponycars stuck instead to traditional rear-drive. Design goals included keeping the cockpit as spacious as before, while reducing outside dimensions. Wheelbase shrunk by seven inches; overall length by eight; width by one.

For details on the 1982, continue on to the next page. 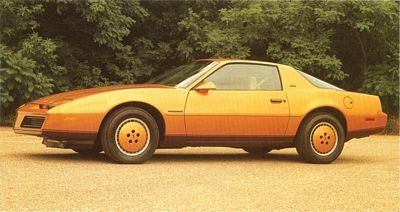 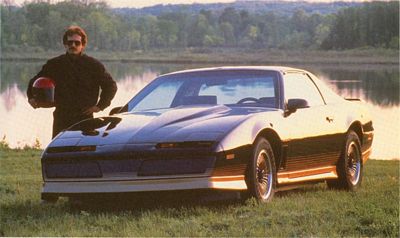 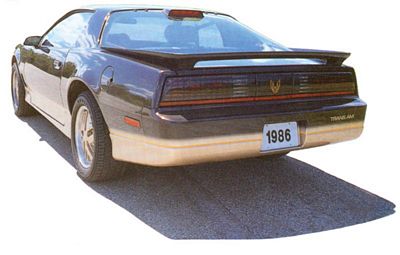 How could this be? Trans Am zealots had seemingly revived the status of their favored machines as virtual "cult" cars. Base and Formula versions appealed to young working women, as well as to men. Yet Pontiac's ponycars weren't keeping pace with modern front-drive rivals. Cited as culprits were the car's little-changed basic design, fast-rising prices, high insurance rates and imperfect workmanship.

Third-generation Firebirds got their most radical facelift in 1991, which carried through 1992.
©2007 Publications International, Ltd.

Auto thieves, on the other hand, adored Firebirds. Along with Camaro, it topped the list of favored targets. GM responded with a "pass key" theft-deterrent system for the 1989 Pontiac Firebird model. Rear shoulder belts now were standard. So were four-wheel disc brakes-at least in Firebirds with the hottest engines.

Performance fanatics had a treat in store, provided they could cope with a price tag past $30,000. A turbocharged Firebird, on sale at midyear, marked Trans Am's 20th anniversary. Only about 1,500 were built, adopting its 250-bhp powerplant from the departed Buick Regal Grand National. Could the turbo travel? Well, a 0-60 time as quick as 4.6 seconds and 153-mph top speed made it the fastest domestic car of the year, if not the era.

A driver-side airbag went into all Firebirds for 1990, elbowing aside optional radio controls in the steering wheel. Base V-6 engines grew to 3.1-liter displacement, while V-8s added a few horsepower.

A front-end facelift emerged in spring of 1990 as an early '91 model, its impertinent snout (with lower-profile headlamps) adapted from the Banshee show car. All except base models added new rear spoilers. Trans Am and GTA also got fresh taillamps and shared new bodyside skirting, while Trans Ams adopted bigger (16-inch) tires on the GTA's lacy-spoke wheels. A newly optional Sport Appearance Package for the base model imitated the Trans Am/GTA look. During 1991, too, a Firebird convertible joined the fleet-the first since 1969.

Anyone unhappy with Firebird's action had a new choice. A Street Legal Performance package for 5.7-liter and high-output 5.0-liter V-8s, marketed through GM dealers, provided up to 50 additional horsepower.

In this extended model year, output swelled past 50,000. Sadly, volume fell by nearly half in 1992, when Firebirds changed little apart from claimed "structural improvements for a tighter and quieter ride."

Trans Am, the PR folks claimed, "supplies unmitigated power for those able to handle it." But plenty of buyers chose to wait for the fourth generation -- the first completely restyled Firebird in 11 years -- which went on sale several months after the 1993 model year began.