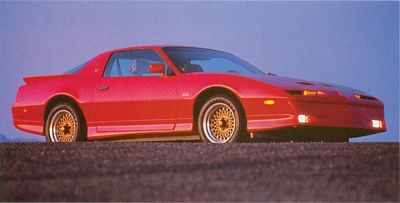 High-performance aficionados gained a new choice-a beastly, if not nasty, GTA rendition of the long-lived Trans Am. In addition to such appearance items as a revised spoiler and rocker skirts, the $2,700 GTA option included the biggest V-8 to be found under Firebird hoods in years: 350-cid (5.7-liter), lifted from Corvette, with tuned-port injection.

Rated at 210 horsepower at 4,000 rpm, the 5.7 delivered an impressive 315 pounds-feet of torque to the rear wheels. The engine received an oil cooler to ease its high-action strain, while the driver slipped into a fully articulating seat to ease the pain on long journeys. Also included: P245/50VR16 tires on gold diamond-spoke (cross-lace) wheels, the WS6 performance package, and four-wheel disc brakes.

Offered only with four-speed automatic, the 5.7-liter engine also was available in regular Trans Ams and in the Formula Firebird-an option package revived this season. Priced at $1,070, the Formula option for base Firebirds otherwise included the carbureted V-8, P245/50VR 16 tires, sport suspension, and rear spoiler. Electing the big V-8 added $1,045 to the Formula or Trans Am price, including mandatory automatic and all-disc brakes.

Standard Trans Am powertrain consisted of a 165-bhp four-barrel 5.0-liter V-8 with five-speed. Optional again: the TPI version, now available with either manual or automatic shift.

Obviously, performance was gaining a stronger foothold, signaled by the abandonment of four-cylinder engines for Firebirds, and the demise of the S/E series. Sure, the huge hood decals were gone; but a real performance machine didn't need impertinent pictorials to demonstrate its prowess.