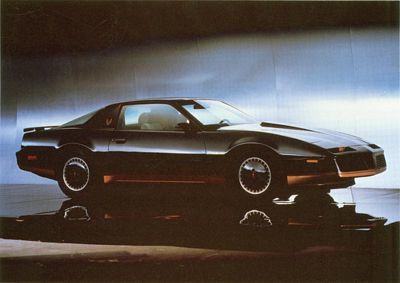 Other General Motors vehicles had downsized in the late 1970s, and now it was Firebird's turn, shrinking to a 101-inch wheelbase and losing more than eight inches in overall length. The third-generation Firebird also measured an inch narrower and lost 500 pounds.

Trans Am buyers had a choice of two 305-cid V-8 engines: the 145-horsepower carbureted version, or an extra-cost edition breathing through Cross-Fire fuel injection, delivering 20 extra horses. Base price was $9,658, versus $7,996 for the entry-level (four-cylinder) model and $9,624 for the touring-ready V-6 S/E.

Inside, a redesigned full-length console sat integral with the dashboard. About 2000 Trans Ams had a new Recaro interior option with Parella cloth front bucket seats, hatch roof, and performance package. All were painted black with gold accents.

Both Trans Am and S/E wore full-width, black-lens taillamps. Only Trans Ams displayed the traditional front-fender air extractors, along with flared wheel openings and turbo-cast aluminum wheels. Trans Ams were even more slippery than their Firebird mates, registering 0.32 coefficient of drag. Less garish than the last of the second-generation Trans Ams, the '82s still looked formidable, despite the abandonment of their immense hood decals.