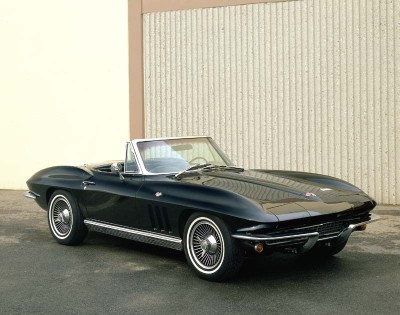 For the 1966 Corvette, the big-block V-8 came in two forms: 390 bhp on 10.25:1 compression, and 425 bhp via 11:1 compression, larger intake valves, a bigger Holley four-barrel carburetor on an aluminum manifold, mechanical lifters, and four- instead of two-hole main bearing caps. Though it had no more horsepower than the previous high-compression 396, the 427 packed a lot more torque -- 460 pound/feet vs. 415. Of course, engine outputs were sometimes deliberately understated in the Sixties so as not to arouse the ire (and, subsequently the rates) of insurance companies. Here, 420 and 450 bhp would be closer to the truth.

Ordering a 427 Corvette meant you had to take it with Positraction and the close-ratio Muncie four-speed; there was no other choice. You also got an upgraded suspension, basically the same as the 396 package, as well as stouter, shot-peened halfshafts and U-joints and a higher-capacity radiator and sump.

With big-block V-8s being the order of the day, there was less demand for the 327, so small-block offerings were cut from five to two for 1966, and only the basic 300- and 350-bhp versions were retained. Arguably, these were still the best all-around engines. Both required premium fuel on compression ratios well over 10.0:1, and they didn't have the rocket-like thrust of the 427s, but their performance was impressive all the same. As before, both could be teamed with the Powerglide automatic, the standard three-speed manual, or either four-speed option. 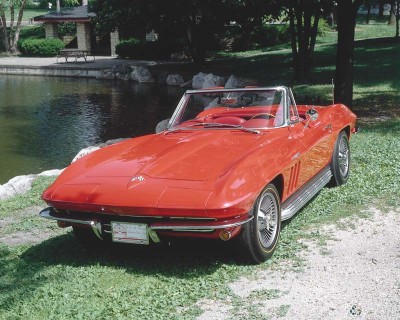 Only minor cosmetic changes were made to the 1966 Corvette.

Engine choices aside, the 1966 model year dawned quietly for the Sting Ray. Its frontal appearance was mildly altered with an eggcrate grille insert to replace the previous horizontal bars, and the coupe lost its roof-mounted extractor vents, which had proven inefficient. This relative lack of change reflected plans to bring out an all-new Corvette for 1967. It certainly did not reflect a fall-off in the car's popularity, however. In fact, 1966 would prove another record-busting year, with volume rising to 27,720 units, up some 4200 over 1965's 23,562 sales. 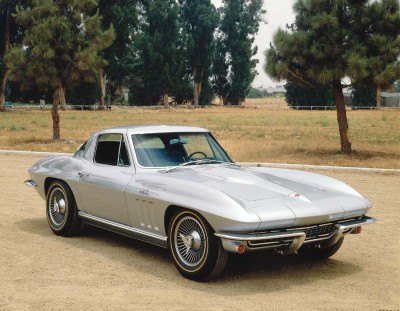