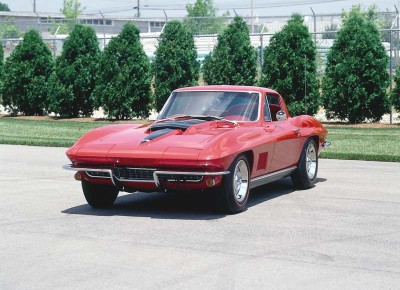 Though it was meant to be a redesign, the 1967 Corvette turned out to be another carryover Sting Ray, because its intended successor was found to have some undesirable aerodynamic traits. Duntov demanded more time in the wind tunnel to devise fixes before it went into production.

Still, the 1967 Corvette was a Sting Ray refined to the limit -- the very best of the five-year run and quite possibly the best Corvette ever. It was certainly the cleanest Sting Ray ever, though changes were again modest. Five smaller front fender vents replaced the three larger ones, and flat-finish rockers sans ribbing conferred a lower, less chunky appearance. New, and thus unique, was a single backup light, mounted above the license plate. The previous models' old-fashioned wheel covers gave way to slotted six-inch Rally wheels with chrome beauty rings and lug nuts concealed behind small chrome caps. Interior alterations were likewise modest and included revised upholstery, and the handbrake moved from beneath the dash to between the seats. The convertible's optional hardtop was now dubiously offered with a black vinyl cover, which was a fad among all cars at the time.

Powertrains changed hardly at all. The two small-block V-8s returned, as did the 390-bhp big-block (hulking beneath a redesigned hood scoop). But the top two 427s now developed 400 and 435 bhp with a switch to triple two-barrel carburetors. As before, they differed in compression ratios -- 10.25:1 and 11.0:1, respectively -- and the solid lifters and transistorized ignition that went on the 425-bhp unit. The latter, RPO L71, was also available with special aluminum heads (instead of cast iron) and larger-diameter exhaust valves as RPO L89, though with the same grossly understated horsepower. 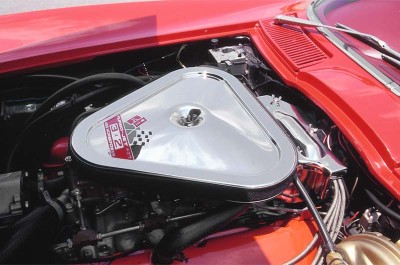 Very little was changed in the powerful 1967 Corvette engine.
The ultimate Corvette engine for '67 was coded L88, which was an even wilder L89 that was as close to a pure racing engine as Chevy had ever offered in regular production. Besides the lightweight heads and bigger ports, it came with an even hotter cam, aluminum radiator, small-diameter flywheel, stratospheric 12.5:1 compression, and a single huge Holley four-barrel carburetor. The result was no less than 560 bhp, again at 6400 rpm. Only one problem: You had to use 103-octane racing fuel, which was available only at select service stations. Clearly this was not an engine for the casual motorist. When the L88 was ordered, Chevy made several individual options mandatory, including Positraction, the transistorized ignition, heavy-duty suspension, and power brakes, as well as RPO C48, which deleted the normal radio and heater to cut down on weight and discourage the car's use on the street. As costly as it was powerful -- at an additional $1,500 over the base $4,240.75 price -- the L88 engine and required options were sold to a mere 20 power-hungry buyers that year.


With potential buyers anticipating the car's overdue redesign, sales for the Sting Ray's final year totaled 22,940, down over 5,000 units from 1966 results. Meanwhile, Chevrolet readied its third-generation Corvette for the 1968 model year. While the new model would hit the streets for the first time in five years without the Sting Ray designation, it would nonetheless retain a marine-based appellation, albeit as a nickname. Soon the "Shark" would emerge to prowl the turbulent waters that were churning in late-1960's America. 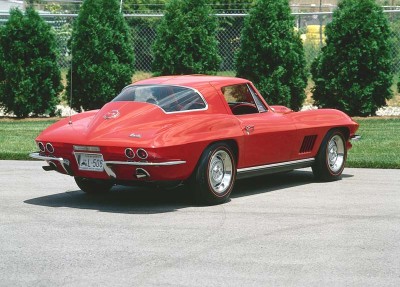 Sales for 1967, the Sting Ray's final year, were down over 5,000 units in anticipation of a redesign.