The 1958 Corvette not only looked heavier than its predecessor, but it was. The car's curb weight now exceeded 3000 pounds for the first time, which was up about 200 pounds from the '57 model. Much of this was due to 9.2 inches in added length and 2.3 inches in added width, bringing its overall dimensions to 177.2 and 72.8 inches, respectively.

On the other hand, the new design afforded a couple of minor improvements: Bumpers, for example, were no longer attached to the body but to the frame, secured by long brackets that providing significantly greater protection. Paint was switched from enamel to acrylic-lacquer.

The 1958 Corvette, though heavier than the previous year's model,
boasted several improvements.

Key revisions made to the 1958 Corvette's interior were just as substantial but were ultimately more successful. Stung by criticism of the former model's awkward instrument panel layout, interior designers made sure every dial (except the clock) was right in front of the driver.

While the '58 Vette may have been flashier than some purists would have liked, there were few complaints with its overall performance, as the 1957 engine lineup returned with few changes. The top powerplant remained the high-compression, fuel-injected, Duntov-cam 283 with a now-official 290 horsepower at 6200 rpm.

A similar arrangement with twin carburetors continued at 270 bhp, but few buyers opted for this version. In fact, the base 230-bhp V-8 accounted for nearly half of '58 engine installations, and only 1500 cars were fitted with fuel injection -- 1000 with the 290-bhp setup, 500 with the 250-bhp version.

Nevertheless, determined speed freaks could still order a near race-ready Corvette from their local Chevrolet dealers, and at a reasonable price. Even the hottest engine, ($484.20), Positraction ($48.45), heavy-duty metallic brakes and suspension ($780.10), and four-speed manual transmission ($188.30) added only about $1500 to the '58's reasonable $3591 base price. That was a remarkable value considering that the 'Vette was more than a match for the likes of Jaguar, Porsche, and other higher-priced European performers. Even off-the-chart exotics like Ferrari weren't far beyond it in performance. 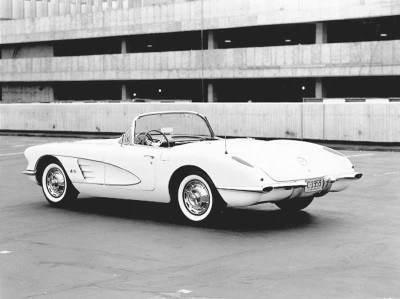 The 1958 Corvette's outstanding performance was
matched with a reasonable price tag.

Car magazines were mostly positive about the '58's mechanical changes, continuing to laud the car's performance and handling characteristics. Sprints from 0-60 mph well under 8 seconds and top speeds of around 125 mph with the 250-bhp fuelie/four-speed configuration were reported. However, the performance-minded "Cerametallic" brakes in the aforementioned heavy-duty package were cited as not being for the faint of heart, as they tended to pull strongly to one side or the other until sufficiently warmed up. Corvettes delivered with this package reportedly carried a sticker on the windshield that warned, "This car is not for street use."

Back on the track, thanks to the efforts of Jim Jeffords and his "Purple People Eater," Corvette again won the SCCA's B-Production crown in 1958. Jim Rathmann and Dick Doane took the GT class at Sebring that year, and veteran Ak Miller won the sports-car class at the Pikes Peak Hill Climb with a time of 15 minutes, 23.7 seconds.

None of these triumphs were mentioned in Corvette advertising, however, as Chevrolet was officially shying away from hawking performance in the wake of the Automobile Manufacturers Association "anti-racing" edict of the previous year. The Corvette's ad copy now emphasized things like a "silken cyclone of a V-8" and a "beautifully compact body" with "a chassis that clings to the road like a stalking panther." 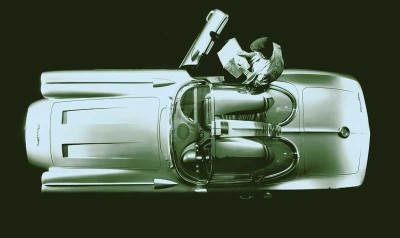 The 1958 Corvette was profitable despite its over-the-top style.

Despite the somewhat extreme styling updates, which critics deride even today, the '58 Corvette turned a profit for the first time in its brief existence. Model-year production was well above 1957's record level, totaling 9168 units. As a result, the 'Vette was one of the few domestic models to score increased sales in that recession-wracked season, the others being limited to Rambler, Lincoln, and Ford's new-for-'58 four-seat Thunderbird.

Bill Mitchell once admitted that he and his associates at GM Styling in the Fifties were too willing to "ladle on chrome with a trowel." Fortunately they were more sparing with the Corvette than any other car in the corporate fleet, and it's to Chevrolet's credit that the busied '58 styling was cleaned up considerably for the otherwise little-unchanged 1959 model.

The 1958 Corvette was flashier than its predecessor, due to improvements made inside and out. It also gave a strong performance -- proving that this car was far from all style and no substance. Here are the specifications for the 1958 Corvette: