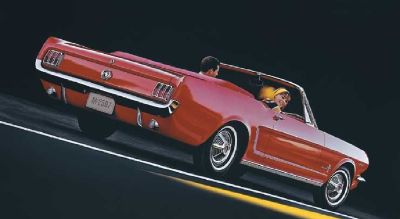 The Mustang convertible struts its stuff in one of two photos used for announcement-week ads.

Public reaction to the 1965 Ford Mustang was beyond even Ford's expectations, and "Mustang Fever" was soon a national epidemic.

One trucker was so distracted by a Mustang in a San Francisco showroom that he drove right through the window. A Chicago dealer had to lock its doors to keep people from rushing in and crushing the cars -- and each other. A Pittsburgh retailer hoisted his only Mustang on a lube rack, only to find crowds pressing in so thick and fast that he couldn't get the car down until suppertime. Another dealer found itself with 15 customers wanting to buy the same new Mustang, so the car was auctioned. The winning bidder insisted on sleeping in it until his check cleared.

It was the same story everywhere. And why not? Mustang looked sharp and was priced right. The hardtop started at just $2368 f.o.b. Detroit, a fact naturally trumpeted in early advertising. Dealers couldn't get cars fast enough. Early models sold at or above retail -- with very unliberal trade-in allowances.

Though first-year sales were originally pegged at 100,000 units, Ford chief Lee Iacocca upped the estimate to 240,000 as announcement day approached. But even that proved conservative. Ford needed only four months to move 100,000 Mustangs. By mid-September 1965, the total was 680,989, an all-time industry record for first-year sales, though a 17-month model "year" helped. The millionth Mustang was built the following March.

To Dearborn's delight, most of these sales were "plus" business, with fully 53 percent of trade-ins being non-Ford products. Even better, the average 1965-66 Mustang left the showroom with a healthy $400 in options, contributing to gross profits for Ford Motor Company estimated at $1.1 billion for those two model years. Casting a glow over the entire Ford line, Mustang was largely responsible for lifting the division's market share from 20 percent to 22.5 percent by 1966, a sizable gain.

Despite this runaway success, some automotive experts could muster only qualified enthusiasm for the Mustang. After all, wasn't it basically a humble Falcon beneath that striking exterior? Perhaps, yet somehow it didn't matter, certainly not to buyers. "That was the magic of this car," Ford chief Lee Iacocca said later. "It stood out, yet it was everyman's car." He might have added that women loved -- and bought -- Mustangs as much as men did.

Mustang's early sales pace was too much for Ford's River Rouge plant, so production was added at two other factories.

Advertising was quick to play on the car's wide appeal by sketching stories of fictional wallflowers transformed into swingers once they owned a Mustang. Typical of the approach, a fetching lady in a toreador outfit was pictured with a hardtop coupe above these words: "If they're still waiting for Agnes down at the Willow Lane Whist and Discussion Group, they'll wait a long time. Agnes hasn't been herself since she got her Mustang...[It's] more car than Willow Lane has seen since the last Stutz Bearcat bit the dust. (And Agnes has a whole new set of hobbies, none of which involves cards.) Why don't you find out if there's any truth in the rumor -- Mustangers have more fun?"

Another ad told the tale of "Wolfgang," who "used to give harpsichord recitals for a few close friends. Then he bought a Mustang.... Sudden fame! Fortune! The adulation of millions! Being a Mustanger brought out the wolf in Wolfgang. What could it do for you?"

The cars claimed to work these life-changing miracles were divided between the "1964 1/2" hardtops and convertibles produced through August 1964 and the "true" '65s built from then on. Among the latter were the 2+2 fastbacks that arrived at dealers on September 9, 1964, when the formal '65 model year began. Incidentally, Ford officially regarded all these cars as '65 models but has usually used 1964 in dating Mustang anniversaries since.

The cars claimed to work these life-changing miracles were divided between the "1964 1/2" hardtops and convertibles produced through August 1964 and the "true" '65s built from then on. Among the latter were the 2+2 fastbacks that arrived at dealers on September 9, 1964, when the formal '65 model year began. Incidentally, Ford officially regarded all these cars as '65 models but has usually used 1964 in dating Mustang anniversaries since.

If these cars could indeed rejuvenate moribund personalities, perhaps it was because they could be molded to fit a variety of personality types. On the next page, discover that Mustang's magic had a lot to do with how easily it could be optioned from mild to pretty darn wild.