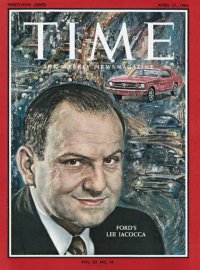 In a coup for Ford PR, Lee Iacocca was on the cover of both Time and Newsweek the week of the Mustang unveiling.

The 1965 Ford Mustang was unveiled to hundreds of reporters by Lee Iacocca at the New York World's Fair on April 13, 1964. The Mustang had been championed by Iacocca, an ambitious car salesman who rose through the ranks on smarts and self-assurance to become head of the Ford division.

The World's Fair unveiling was part of a sweeping publicity initiative, and Iacocca, center stage that day, was in his element. His address is serves not only to introduce the world to a new kind of car, but also hints at the power of a new generation.

The nation's mourning over the November 1963 assassination of President Kennedy was just beginning to lift. The Beatles' sensational American TV debut had come in February '64. Into this spirit of youth and renewal stepped the Mustang, itself destined to play a role in defining the 1960s. Here are excerpts from Iacocca's historic speech:

We appreciate your coming here to share this moment with us, one of the most important occasions in Ford Division history. Incidentally, this is Ford's first international press introduction. Here in New York we have newsmen from Canada and Puerto Rico as well as the United States. And while we meet here, the Mustang is being introduced in 11 European capitals to some 2000 reporters, editors, and photographers.

From the beginning, the Mustang has been an exciting venture for all of us. We haven't been able to contain our excitement entirely, with the result, I'm happy to say, that the public has caught some of our fever. We hope it's highly contagious.

We can't think of any [Ford] product... that has generated more advance interest than the Mustang. People in every state and from as far away as England, Malta, and Australia have written to ask for more information about the car. Many were ready to order it sight unseen!...One customer we may have to disappoint. He wants a Mustang [with] a 427 high-performance engine in it. We've forwarded his name to Project Mercury at Cape Kennedy.

Let me put the Mustang into perspective. First, it is a completely new line of cars -- separate from Ford, Fairlane, Falcon, and Thunderbird.... Second, Mustang will be available in two-door hardtop and convertible models with probably the longest list of options and accessories ever offered on a new car.

Third, the Mustang will have an astonishingly low price -- so low we plan to introduce it with an intensive campaign of price advertising. The suggested retail price for a two-door Mustang hardtop with standard equipment, delivered at a Detroit dealership, will be just $2368. Fourth, the Mustang will be built at two assembly plants -- Dearborn, Michigan, and San Jose, California.

Fifth, our introduction program will be one of the most extensive on record. We will run Mustang announcement ads in 2600 newspapers reaching 75 percent of the households in the country, and in 24 top magazines with a combined circulation of 68 million. Beyond that, we have lined up a television introduction unlike any other ever attempted. On Thursday evening we will sponsor three half-hour shows simultaneously on the three major networks from 9:30 to 10 p.m. Eastern Standard Time. We expect to show the Mustang on TV screens in more than half the homes in the country -- an estimated 29 million.

Finally, we plan to fit the Mustang into our program of performance events. We'll use it in such famous road rallies as the Midnight Sun in Sweden, the Alpine in France, and the Spa-Sofia-Liege between Belgium and Yugoslavia.

We don't claim the Mustang...can be all things to all people. But we do believe it will be more things to more people than any other automobile on the road.

Iacocca went on to explain why the Mustang would become so popular, and made some surprisingly prophetic observations about the market for his new car. Move on to the next page to read how Lee Iacocca saw the future.