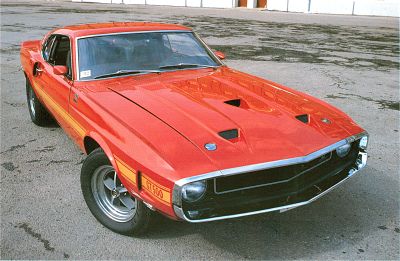 The 1969 Mustang retained the original 1965 wheelbase, but dimensions were generally increased throughout. Surprisingly, roadability improved too; car for car, a '69 handled better than its predecessor, and the Cobra Jet Mach 1 and Boss 302 were the fastest production Mustangs yet produced. Tradition demanded that Shelby Mustangs, including the 1969 Shelby GT-350 and GT-500 be somewhat faster, but it wasn't going to be easy.

By 1969 the Federal government had introduced serious exhaust emission standards and safety requirements. Meanwhile, insurance premiums in the region of $1,000 were being quoted for 25-year-old males who drove fast automobiles. The taste of buyers had also changed: luxury was becoming more important than performance. Vietnam, ominously, was siphoning off thousands of young men.

Carroll Shelby saw all these developments and reconsidered his position. Ever the individualist, he had begun in 1965 by building a car he himself wanted to drive -- the original GT-350, a hairy, noisy, no-holds-barred American grand tourer for the sporting driver, as opposed to the driving sport. The market for such cars was limited; more buyers wanted luxury, and between 1966 and 1968, the Shelby Mustang had gradually evolved in that direction. Of course, it was still a very potent high-performance grand touring car -- but it wasn't like the original.

Neither did Shelby enjoy making decisions in committees where accountants and lawyers usually overruled designers, engineers, and test drivers. Between Ford management and the Federal government, there were more bosses in his hair by 1969 than he'd ever encountered before. Ford, furthermore, was intruding on his turf with cars like the Mach 1 and Boss 302.

Nevertheless, Carroll lent his name to yet another Shelby series, the 1969 GT-350 and GT-500 (the KR suffix was dropped), though they now suffered the indignity of being built alongside regular production Mustangs in Southfield, Michigan.