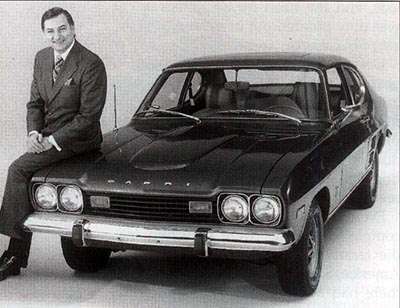 William Benton, Lincoln-Mercury general manager, rests on a 1973 Capri, which was sold as a Mercury in the U.S. See more classic car pictures.

Though well-known in the United States, the 1971-1978 Ford Capri and Ford Capri II origins were in Europe. Ford Motor Company thought it was launching a European Mustang when its British and German branches developed the sport coupe. In the process, though, Ford also created a sexy import model for the American market.

April 17, 1964, was an exciting day for many at the Ford Motor Company. With fingers crossed and hopes high, they were about to unleash a sporty little coupe on the American road. Its release would create a whole new niche market. Within two years, more than 1 million of Ford's new "ponycars" were in garages all over the United States, with some having gone as far away as Europe.

The new car was, of course, the Mustang. It did quite well in Europe, too, but it was still an American export and it was burdened overseas with expensive tariffs, duties, and other related government fees. It didn't take long for those involved with Ford's international operations to realize that there was major sales potential for a kind of ponycar in foreign countries. Thus was laid the groundwork for a European version of the Mustang.

In June 1965, the package goals of this new car were established. Just as the Mustang had been born of the Falcon platform, a similarly utilitarian vehicle was needed to act as the basis for the European version. (Engineering costs had to be kept to minimum by using as many existing suspension, electrical, and drivetrain parts as possible.) Such a car was available in the popular Cortina, produced by Ford of England since the autumn of 1962.

The next ingredients that had to be addressed concerned passenger capacity. It was decided that like its Mustang cousin, it should be a car that could be enjoyed by the whole family with seating capacity for four, and it had to provide as quiet and comfortable a ride as possible. On top of this, Ford executives wanted the new car to deliver responsive handling, and most importantly, have stunning, sales-winning looks.

By July 1966, the new ponycar with continental flair had won final approval for production. Everyone involved liked what they saw, and enthusiasm was not contained just to Ford of England, but also extended to Ford's German headquarters in Cologne. From the start, it had been planned that the European ponycar would be assembled at the Halewood facility in the United Kingdom, plus the Cologne and Saarlouis plants in Germany.

What to call it? Ford of England had been using the letter "C" in naming most of its models. During development, the design team had latched on to the name "Colt" as a working title. However, those in charge of marketing wanted something more powerful that would suggest exhilaration and "pizzazz" to the European buyers for whom they were aiming.

After much discussion and research, one name seemed to meet all these requirements: Capri. Taken from a small island off the coast of southern Italy, Capri seemed perfect for a jaunty little car, conjuring up visions of gentle sea breezes and carefree holidays.

Capri was a name already familiar to European motorists, having graced a sleek hardtop coupe in the British Ford Consul line in the early Sixties. The name also had a history in America, which eventually proved fortunate even though the U.S. market wasn't initially in consideration to get this European ponycar. It had first been used in the States for a special Lincoln Cosmopolitan coupe starting in 1950. From 1952 to 1958, there was a Capri series in the Lincoln lineup. Then Mercury revived the name as a trim level of the intermediate Comet 1966-1967.

Ford waited until the last day of the Brussels Auto Show in January 1969 to unveil its European ponycar. While waiting until the end of the show might seem to be a bit anticlimactic, the effect boosted attendance on the last day to record levels, and the car was hailed as an instant success in design and concept. On February 5, 1969, a few days after the Brussels show closed, Capri went on sale across Europe and the UK.