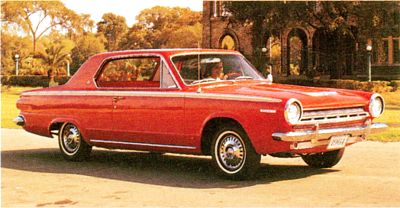 Virgil Exner did some goofy things in his last years as Chrysler styling chief, but the 1963 Dodge Dart GT wasn't one of them. Clean, even Italianate in some ways, it elegantly refutes the notion that Exner's design talents were waning when this car was initiated circa 1960.

That year brought Chrysler's first compact, the Valiant, which was assigned to Plymouth. Dodge did without, but prospered anyway with low-price full-size Darts. The next year, though, Dodge got a Valiant-clone called Lancer. This matched GM's new 1961 Buick Special, Olds F-85, and Pontiac Tempest, but wasn't nearly as popular. Lancer also trailed Valiant in sales despite the 1962 addition of a sporty GT hardtop.

With rebodied compacts scheduled for 1963, Dodge sought a more distinctive Lancer to better compete with the B-O-P trio and Mercury's Comet. The result was a larger, prettier compact bearing the familiar Dart name (substituted at the 11th hour). Wheelbase swelled five inches except on wagons, which kept the original 106-inch span, as did the 1963 Valiants. Offerings included new convertibles in midrange 270 and bucket-seat GT trim, the latter again offering Dodge's sole compact hardtop. Rounding things out were 270 and base 170 two- and four-door sedans and four-door wagons. Save the last, which measured 190.2 inches overall, Darts stretched 7.1 inches longer than Lancers -- much closer to competitors' sizes.

Keep reading to learn about the styling and sales success of the 1963-1966 Dodge Dart GT.

The standard 101-horsepower 170-cubic-inch Slant Six (inherited from Lancer/Valiant) delivered 0-60 in a leisurely 20 seconds or so. The extra-cost 145-bhp 225 engine reduced that to about 15, raised top speed to near 100 mph, and returned 16-17 mpg (the smaller six added 1-2 mpg at most). Transmissions were the expected three-speed manual or optional TorqueFlite automatic, the latter a real competitive advantage.

So too was Chrysler's torsion-bar front suspension, still earning plaudits after six years. Motor Trend felt "there's nothing...in the Dart's size and price class that can touch it for all-around readability." As usual, the standard manual steering was manageable but painfully slow (5.3 turns lock-to-lock). The optional power setup was quicker (3.5) but generally judged over-boosted. Well, you can't have everything.

But Dodge suddenly had a lot more compact sales, the 1963 Darts generating a spectacular 250 percent more than the 1962 Lancers. The GTs accounted for roughly 20 percent, which they would hold through 1966.

Dart did even better for 1964, volume sailing from 154,000 to more than 193,000. Styling changes were confined to a mild face-lift, but the big news for performance fans was the midyear availability of a V-8 option. This was a lively, free-revving 273-cid unit derived from Chrysler's new-generation 318 and boasting the latest in "thinwall" block castings á la Ford's contemporary 260/289.

Styling became more aggressive for 1965. So did performance, as an even hotter V-8 option arrived with 235 bhp courtesy of a four-barrel carb and wilder cam. Even better, it could be combined with a new heavy-duty suspension kit and four-on-the-floor manual gearbox. Car and Driver loved its test GT with all these goodies. The fortified V-8, said the editors, "is a robust, eager engine that makes all sorts of neat sounds while whisking the Dart around in fairly impressive fashion" -- which timed out as 8.2 seconds 0-60, a strong showing even today. Dart sales were stronger than ever, too: over 209,000 in all.

Volume slipped to 176,000 for 1966, though this was due more to market conditions than any Dart deficiencies. The 1963 design was restyled one last time, with a squarish front predominating. With the "right stuff," the GT remained, as Motor Trend put it, "one of those rare cars that add a certain pleasure to driving, and that's saying something for a machine designed as a compact family vehicle."

Indeed it was, though even hotter Darts were in the offing for 1967 and beyond. Today, the 1963-1966 GTs are the very model of inexpensive enthusiast wheels (even the low-volume ragtops don't cost much) -- more proof that good things really do come in small(er) packages. 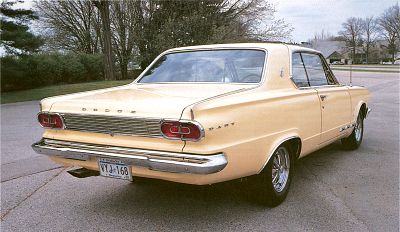 A stronger engine with 235-bhp was available for the 1965 Dodge Dart GT, when finally it lived up to its name.
©2007 Publications International, Ltd.

The 1963-1966 Dodge Dart GT did its best to compete with other sporty compacts such as the Buick Special, Olds F-85, and Pontiac Tempest.