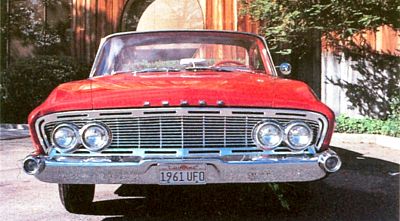 Though better known today as a compact, the 1960-1961 Dodge Dart was a full-size car. It was also a huge sales success. The sharp contraction of the medium-price market after 1957 forced Chrysler to pare down from five divisions to just Dodge and Chrysler-DeSoto-Plymouth. This left many Dodge franchises without a companion make for the first time, and they were jealous because the timely new 1960 compact Valiant would be sold only by that "other" division.

But management placated Dodge dealers by granting a greatly expanded 1960 lineup divided between two "senior" series, replacing Royal and Custom Royal, and lower-priced "junior" models to take over for Coronet as full-size Plymouth competitors. This considerably fattened the Dodge catalog, which went from 19 models to no fewer than 35.

Christened Dart, after a finny 1957 Chrysler show car, the new junior line was almost a separate make, with three series, a full range of body styles, and 23 individual models. Seneca was the price leader, followed by Pioneer (which offered a hardtop coupe) and the line-leading Phoenix (which duplicated that and added a convertible too).

Non-wagons spanned the 118-inch wheelbase Plymouth had used since 1957. Wagons rode the 122-inch platform adopted for that year's Dodge and DeSoto (plus Plymouth wagons and the 1959 Chrysler Windsor). The latter also served Dodge's 1960 seniors.

Darts probably fared best among Plymouths and Dodges, with modest fins and a busy but not unattractive face. If not the prettiest cars of 1960, they were certainly better looking than the more exaggerated senior Dodges and the equally overdone Plymouths.

Keep reading to learn about the styling and sales success of the 1960-1961 Dodge Dart.

Styling of the 1961 Dodge Dart wasn't as well accepted, and sales took a nose dive, but the newly available 413-cid V-8 could make it a real screamer.
©2007 Publications International, Ltd.

The 1960-1961 Dodge Dart power teams were basically those of Plymouth's 1960 "standards," plus a few more. All models save the V-8-only Phoenix ragtop came with the larger, 225-cubic-inch version of the Valiant's new 170-cid Slant Six, a modern overhead-valve design with efficient wedge-shape combustion chambers and 145 horsepower.

The base Seneca/Pioneer V-8 was a 230-bhp version of the familiar Dodge/Plymouth 318. Phoenix offered a 255-bhp option, standard on the convertible. Next came a 295-bhp 361 for Pioneer and a 383 with 325/330-bhp for Phoenix, all with four-barrel carb, 10:1 compression, and Chrysler's tuned "Ram Induction" intake manifolding.

Futuristic features were typical of Chrysler in this period, and the Dart had its share. Options included those two 1959 Chrysler novelties, swivel front seats and automatic day/night rearview mirror. And Phoenixes sported the corporation's new 1960 oval-square steering wheel, which gave more under-rim thigh clearance but looked quite odd -- aggravated by Dodge's stylized hub that one magazine likened to "a man on a torture rack."

Properly equipped, a 1960 Dart could be a hot performer in the great D-500 mold. That, along with attractive prices in the $2,300-$3,000 range, made Dart amazingly popular, and Dodge happily retailed over 323,000 -- a whopping 87 percent of 1960 production and more than double its 1959 tally. Dodge promptly went from eighth to sixth place in the industry -- at the expense of Plymouth, which lost about 10,000 sales despite the Valiant.

Dodge lost far more than that for 1961, plunging from nearly 368,000 to just over 269,000 and a ninth-place finish. It should have done better. Dart was back with the same broad lineup, virtually unchanged prices, and even a sizzling new ram-induction 413 V-8 option with 350/375 horses. Furthermore, Dodge gained its own compact, a Valiant clone called Lancer.

But Dart styling was now an odd combination of senior-Dodge front end and 1961 Plymouth "plucked chicken" rear fenders with canted blade fins stuck on -- backwards. Sales plummeted to about 183,500, though this was nothing like the disaster that awaited the 1962s -- shrunken to near compact size and even uglier.

Which only proves how much styling sold cars in the 1960s, as indeed it does today. But though the full-size Dart vanished after 1961, the name didn't, destined for new success from 1963 as a compact with far better looks.

The 1961 Dodge Dart included three series of styles including the price-leading Seneca, the Pioneer, and the line-leader Phoenix.
©2007 Publications International, Ltd.

The 1960-1961 Dodge Dart was a huge sales success despite having to deal with competitors Chrysler-DeSoto-Plymouth.