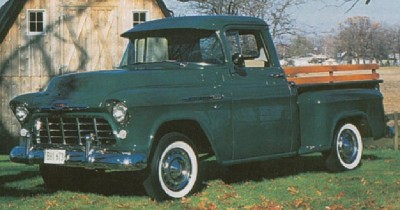 Visible changes common to 1956 Chevrolet trucks like this 3100 pickup were held to shuffled badges.

The 1956 Chevrolet light-duty trucks underwent only minor changes. Most revisions were cosmetic, but this was the year Chevrolet made tubeless tires standard throughout the line.

Subtly relocated series designation spears began to say more about what went on under the hood and floorboards. Along with the numeric series designations, trucks with manual transmissions proclaimed simply Chevrolet. Those with automatics said "Chevrolet Hydra-Matic [sic]". Vehicles with the eight-cylinder engine continued the V-8 badge below the series spear plus a vee on the revised hood emblem.

The Cameo came in eight two-tone combinations for 1956. With an Arabian Ivory base (base meaning the main body color), you could specify Ocean Green, Empire Blue, Regal Blue, Crystal Blue, Cardinal Red, or Granite Gray. With a Cardinal Red base, the trim option was Sand Beige. With a Jet Black base, the trim color was Golden Yellow -- very striking.

Interior colors were also expanded for 1956. Combinations included red/beige, dark blue/light blue, light green/gray, and charcoal with all colors. Cameo knobs were again chrome while other models got black knobs. Cameo wheel-covers were the same as those used on the 1956 Chevrolet Bel Air.

Chevrolet's big news for 1956, though, had to do with the small-block V-8. The four-barrel 265 now delivered 205 bhp, but this top version of the V-8 was available only in Chevrolet passenger cars. Even so, to underscore the small-block's performance and enhance the pickup's sporty nature, Chevrolet had racing mechanic and engine builder Smokey Yunick set up a Cameo with the four-barrel V-8 for Daytona Speed Weeks.

Smokey not only tweaked the Cameo's non-production V-8 but also drove it at the beach. With the heavily modified engine, he managed to set a new Class 5 record for standing-mile acceleration: 89.524 mph. A Cameo also took honors at Daytona that year through the flying mile, but apparently no records exist of the driver, modifications, or speed.

Motor Trend, meanwhile, did a quick test of a McCulloch-supercharged 1956 Cameo and published a 0-60-mph time of 8.7 seconds and a run through the quarter mile in 17.6 seconds.

Still, there was more power on tap for every workaday Chevy light-duty truck. A compression boost to 8.0:1 helped the six harness 17 additional horses (140 total) and the 265 V-8 was shown at 155 horsepower, though compression was still advertised at 7.5:1.

Chevrolet trucks were more radically changed for 1957 than they'd been for 1956. For the 1957 season, Chevy offered a 4×4 option in a dozen 3100, 3600, and 3800 models. The division also introduced the 283-cubic-inch V-8, a bored-out version of the 265, but its use was restricted to the car-based sedan delivery and several medium- and heavy-duty truck series. (Light-duty engine and transmission choices stayed unchanged, though sales materials listed the Trademaster V-8 as having an 8.0:1 compression ratio.)

See the next page to read about the 1957 Chevrolet Cameo Carrier.